In Brussels; Yemen a“Forgotten Land and Closed Hall of Violations” 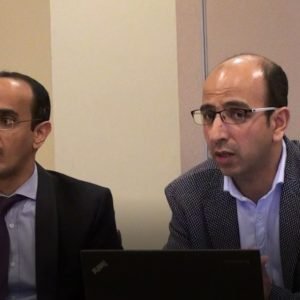 In two events organized in Brussels, SAM organization for Rights and Liberties, based in Genève launched its annual human rights report for 2016 “the Forgotten Land”, and photo exhibition “Yemen; a closed hall of human rights violations”.

SAM also organized a seminar to discuss its human rights report “the Forgotten Land”, in which SAM monitored and documented the state of human rights situation in Yemen during 2016. The report included various violations and crimes, including killing, enforced disappearance, indiscriminate attacks on residential areas, landmines and IEDs, and reviewed other violations committed by conflict parties in Yemen.

The report also addressed violations on press freedom, human rights defenders, as well as impact of the conflict on children and women. The report was also issued in English language in 52 pages.

Photo exhibition, on the other hand, included tens of expressive photos that reflect the political scene in the country by professional Yemeni photographers. The pictures showed events chronology in Yemen, starting from youth revolution in 2011, national dialogue processes and following political and military events, all the way to Houthis coup and Arab Coalition intervention.

The report was launched in a seminar moderated by Nabil Al-Baydani and reviewed by guest of honor Mr. Baraa Shaiban, political activist and NDC delegate. Others concerned on human rights and international law attended the seminar.