Side event in Genève.
Yemen a big prison for Yemenis featured with Houthis-Saleh and UAE detentions 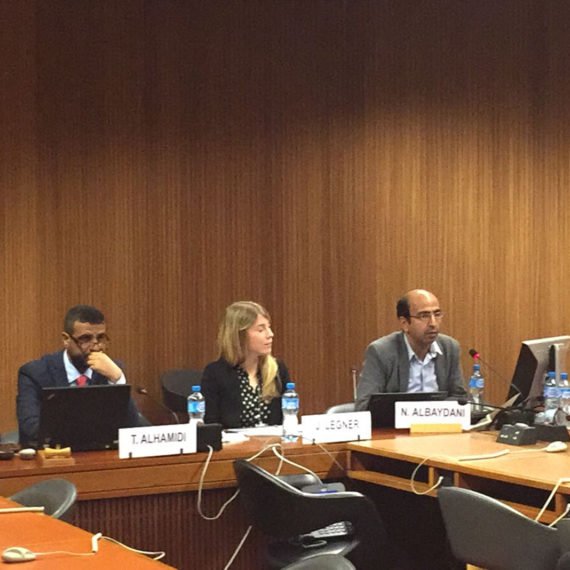 SAM organization has organized several side events in partnership with international organizations in the Human Rights Council in Genève, on enforced disappearance, prisons, and detention centers in Yemen.

Nabeel Al-Baidhani, SAM director said in the side event that he moderated, “Yemen has become a huge jail for Yemenis where conflicting parties are perpetrating continuous violations, abduction, imprisonment, and torture, and disregarding civilians”.

Tawfeq Al-Humedi, documentation unit officer indicated in the event to prisons and detention centers controlled by Houthis-Saleh, where SAM has documented many relevant details through its monitors in territories under their control.

Al-Humedi addressed many painful cases of detention and sufferings of detainees as well as enforced disappearance of detainees whose whereabouts is unknown. He further indicated that detainees are a rights and humanitarian issue that has many personal, and social implications, and involves multiple violations; enforced disappearance, torture illegal trial, personal freedom right, child rights, family rights and other rights. Therefore, such issue is a matter of priority, and involves informal prison where detainees are kept and subjected to gross violations.

Al-Humedi noted that SAM organization has issued its report the Forgotten Land” in 2016 that documented detention and disappearance of 5500 people, also documented 2560 enforced disappearance and detention during the first half of 2017, many of them are subjected to torture in informal prisons.

SAM organization also documented more than 208 informal prisons managed by conflicting parties, with majority managed by Houthis group i.e. 70% of them, where detainees are subjected to psychological and physical torture.

Jawad indicated that existence of tens of informal prisons in the southern governorates, calls for serious stand by the government and Arab Coalition, noting that many militialike practices of enforced disappearance and torture were reported. He added that “the oppressive policies practiced by the UAE backed militia in Yemen are gross violation to international conventions”, where   international organizations’ reports have indicated to the violations and torture in the prisons managed by pro UAE militia. He addressed the systematic enforced displacement and establishment of informal prisons in Aden and Hadhramout governorates.

Julia Legner, Legal Officer for Gulf and Yemen, at Karama Organization for Rights and Freedoms, in Genève addressed the legal framework of the enforced disappearance and detainees, considering enforced disappearance as crimes penalized by the international humanitarian law, and should stop immediately at the conflict zone, as they imply miseries incurred by detainees’ relatives.

The legal expert discussed the legal status of the enforced disappearance and informal prisons according to the treaties and conventions ratified by Yemeni government, and noted that Karama and SAM have filed joint complaints to the Human Rights Council, on the enforced disappearance. She also urged the international community to act immediately and pressure all parties to release all detainees, and disclose informal detention centers.

After the side-event, the participants urged the international community to assume its role and salvage Yemenis from such practices and obligate parties to the conflict to respect the international and humanitarian conventions.