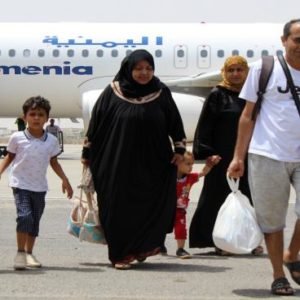 SAM Organization for Rights and Liberties condemned the arbitrary procedures and discriminatory decisions taken by certain Arab governments against Yemenis residing abroad; such as high fees on residence permission and requiring visas to enter such countries’ territories.  Such decisions are clearly and explicitly incompatible with the basic principles of the international law and tighten the blockade on Yemenis.

The rights organization, based in Geneva, said in a press release today, “apparently there is a systematic campaign targeting Yemenis abroad”.

SAM said that “since commencement of the war launched by the Saudi-led Arab Coalition in Yemen, many Yemenis left for other countries in pursuit of security and medical treatment, pending stability to their country, however, many Arab countries, faced Yemeni influx with requirement of entry visa and security clearance, which were not required in the past.”

The Organization clarified that many Arab countries did require a pre-entry visa to allow Yemeni into their territories, such as Libya, Egypt, Syria and others, however most these countries require now such visas, which is considered by SAM as “an arbitrary decision and exacerbate agonies of war on Yemenis, particularly those who travel for medication or education”.

SAM pointed out that the Emirate of Sharjah issued new instructions to grant an entry visa to all expatriates residing in GCC to the UAE, with exception to Yemenis, who need to obtain a prior visa to enter.

Within the same context, Egypt required from Yemenis aged between 16 to 50 to obtain a prior entry visa from its embassies and consulates abroad to enter its territories.

SAM indicated that it has received many complaints from Yemenis on the negative impacts of such unexpected decisions on them, in addition to the difficulties and intimidation they face at the respective airports, including unnecessary interrogations by the security, and sometimes detention of Yemeni passengers, and locking of transit passengers in the departure terminals for hours, without providing needed services, particularly for the patients, leading to the death of some passengers in transit terminals.

SAM confirmed that the recent decisions by the Saudi authorities to increase residence permission fees, has exacerbated the expat Yemenis sufferings, and forced them to leave the country, also many expats returned to Yemen, where their lives are at risk due to the ongoing war, according to reports received by SAM.

“such decisions and procedures by certain Arab governments, exacerbate the humanitarian situation of the Yemeni people, inside and outside the country, due to the continuing war for about three years, that forced many citizens to leave to neighbouring countries, seeking safe and settled life” said SAM spokesman, Tawfeq Al-Humeidi. “instead of lending a helping hand to the Yemenis, who lives exceptional conditions, these countries issued unfair decisions, it is disgraceful and shall stop”, he added.

SAM called upon Arab governments to reconsider their decisions on Yemenis and Yemeni communities, that restrict their movement, and to take the humanitarian and security situation in Yemen into account, not only their security concerns.