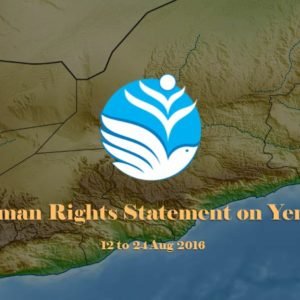 SAM Organization for Rights and Liberties, based in Genève, is watching with great concern the escalation and deterioration in human rights violations in Yemen during the past period. Such situation has negatively impacted people’s life in Yemen who lives at difficult conditions and are exposed high risks.

Human rights violations have multiplied and diversified with its worst manifestation on journalist and politicians. We hold parties to the conflict, particularly Houthis group and military units loyal to Saleh fully responsible for providing protection to journalists.

SAM monitors have documented increase in human rights violations during 12-24 August 2016, that has impacted different categories revealing great deterioration in the human rights situation in Yemen.

* On Friday, 5 August 2016, in Al-Jouf governorate, journalist Mubarak Al-Abadi, Suhail channel correspondent and collaborator with Al-Jazeera channel, was killed while covering fights in the governorate.

* On 12 August 2016, in Nihm district cameraman at Suhail channel Anwar Al-Haweri, was injured while covering fights in the city.

*  On 15 August 2016, in Ibb governorate, center of Yemen, journalist Ashraf Al-Falahi, correspondent of London based 21 newspaper, was threatened by armed elements affiliated to Houthis group, under the allegations that he mobilize combatants in favor of their rivals.

* In Sana’a, journalist Waheeb Al-Naseri, was dismissed from his job in Sout Al-Shouri news website, the mouthpiece of Poplar Force Federation party, allied with Houthis, and suspended his salary without any legal grounds.

* SAM organization has documented the death of Adel Abdu Ahmed Al-Zou’ri, 28 years, from Zou’r village in Al-Hema Al-Dakhlia, on 20 August 2016. His body was found beside police hospital with signs of torture. Houthis called his father to take his body. Adel was abducted before one-month earlier university of science and technology hospital. Adel was MA holder and Ph.D. Student.

* On 17 August 2016, engineering Yaser Al-Nasheri, Hajjah governorate, succumbed to death due to injuries he sustained and was paralyzed as a result of torture inside Houthis prisons, following his abduction and disappearance for about one year.

* During the period identified in this statement, three political activists were assassinated in Aden and Dhamar governorates in less than 48 hours. All victims were members to Islah party.

* Where in Aden city, which is under Hadi’s government control, engineering Saleh bin Hulais, chairman of judiciary department in Islah party was assassinated while leaving the mosque on 15 August 2016.

* In Dhamar governorate, which is under Houthis’ and Saleh military units control, Saleh Ahmed Farhan Al-Anhemi, 47 years, member of Islah Shura council was assassinated on 15 August 2016.

* Taiz city witnessed highest number of violations, where 8 civilians were killed, including one woman, and 37 others were injured in an indiscriminate bombing by Mortars and Howitzer guns by Houthis group and military units loyal to Saleh located in Tabat Sofitel, where civilians in highly populated areas in the city were targeted as well in Al-Shaqab village, Saber Al-Mowadem district.

Violations to Freedom of Opinion and Assembly:

* In a cultural even for Bahai sect in Yemen, organized by Nida Foundation for Co-existence and Building, in cooperation with Joud Foundation, in Sana’a, elements from the National Security, under Houthis’ control attacked the event on Wednesday 12 noon, 10 August 216, and arrested 65 people into NS jail, including 15 women and children. Their relatives were denied access to visit them or to contact their lawyers.

* SAM organization’s monitor contacted (A.M.A) father of one detainee who stated that Houthis group and Saleh forces released 52 of them and kept 13 under NS detention, including two women.

* Within a series of violations and crimes committed by Arab Coalition countries, within the context of the armed conflict with Houthis group and Saleh forces, SAM organization has documented airstrike on Shaif Asem house in Biet Asem village, Nihm district, on Tuesday 16 August 2016, killing 14 civilians, 11 of them from Asem’s family, including 7 children and 4 women.

* In Al-Jouf governorate, 3 civilians were killed, and 7 others were injured, including one child by wrong airstrike by Coalition forces, on Al-Dahl market, in Khab and Al-Sha’f district. Eyewitnesses confirmed that Houthis military patrol passed by the market minutes prior to the attack.

SAM organization calls upon parties to the conflict to respect and commit to the international humanitarian law, and to the principles of human rights, particular that related to protection of civilians and civilian objects and to avoid indiscriminate bombing to residential areas, particularly in Taiz city which is subject to daily indiscriminate shelling by Houthis group and Saleh forces. The organization also condemns killing of civilians by the Arab Coalition airstrikes, and calls upon Coalition countries to investigate these attacks, and to apply strict measures and limit their airstrikes to military objects and fighting zones, away from civilians and residential areas.

SAM organization also stress on the need to ensure freedom of press and safety of journalists and media institutions, particularly journalists operating in the armed conflict areas. As well safety of abducted journalists according to 1979 additional protocol attached to Genève 1949 convention on protection of civil journalists who undertake tasks at armed conflicts areas, article 34 of chapter ten, to the customary rules of the international humanitarian law 2005, and to the Security Council Resolution No.1738

The Organization also calls upon Hadi authorities and the administrative and security authorities in Aden governorate, Houthis group, and Saleh forces in Sana’a to undertake their legal responsibility according to the constitution and the international law, in preserving civilians and to provide safe environment away from the terror practices on political activists, and demand an immediate transparent investigation in the assassination cases and to reveal their conditions to the public and bring perpetrator to justice.

SAM organization also condemn torture practices that lead to the death of Adel Al-Azou’ri, and consider that as a crime against humanity that has no status of limitation, to which Houthis-Saleh group shall bear criminal liability according to the international law and the Convention against Torture and Other Cruel, Inhuman or Degrading Treatment or Punishment.

SAM Organization for Rights and Liberties also calls upon Houthis group and Saleh forces to respect civilians’ right of freedom of expression and peaceful assembly, and to cease all incitements against Bahaians, and to immediately release their detainees, including the two women, detained at National Security jail in Sana’a, and shall provide all needed facilitation to the sect to practice their faith and religious rituals.