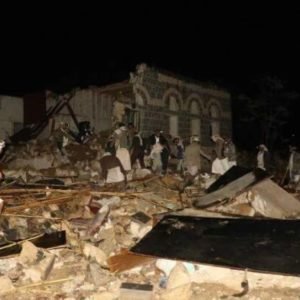 SAM Organization for Rights and Liberties, based in Genève, reported that an Arab Coalition airstrike on a funeral house of Hadi Saleh Al-Kaina’i, in Arhab district, Sana’a, on 15 February 2017, killed 6 women, and injured 8 others, including 2 children. “death of civilians in funeral house proves that the Coalition pays little attention to civilians’ life, and breaches international humanitarian law rules of war”, said Tawfeq Al-Humeidi, director of monitoring and documenting unit. SAM organization received identical reports confirm that on 4 p.m. 15th February 2017, the residents heard fighters flying, and moments later the AC stroke Mohammed Hadi Saleh Al-Kaina’i’s house in Arhab, Sana’a governorate where mourners gathered, including women and children, killing 6 women, and injuring 8 others, including 2 children.

Most of the mourners left the location minutes prior to the airstrike, mitigating the casualties, however the house was destroyed and other two houses were partially destroyed. Ghamdan Ali Saleh Al-Zubeiri, one of the mourners in males’ hall, said to SAM that; on 4 p.m. he heard the fighters roar above them, and moments later a missile hit Mohammed Al-Kaine’i’s house, killing 6 women, and injured 8 others, including 2 children. “the house was congested with women and children, most of whom left minutes earlier, otherwise it could have been a horrible massacre”, He added. Ali Mohammed Saleh Al-Zubeiri, confirmed to SAM that he was about 200m far when he heard the strike that destroyed great parts of the house, and he rushed to the house with others to rescue, he saw many dead and injured women, whose number he can not confirm. Muhsin Saleh Hamoud, said he attended 30 minutes later, where people were gathered to remove ruins, dead bodies and rescue injured, he confirmed that he saw 6 dead women and other injured, he knew from others that 10 were injured, including two children. Other identical reports confirmed that AC airstrikes reputedly stroke civilian objects. SAM monitors in Yemen have documented horrified violations on women and children during the war, topped by indiscriminate bombing on residential areas. International humanitarian law, war laws, are applicable on all conflicting parties in Yemen, and prohibits deliberate or indiscriminate attacks on civilians and civil objects. The law obliges parties to the conflict to take maximum precaution measure during the military operations, to avoid civilians and minimize damage among civilians’ life and civil objects. “these airstrikes will exacerbate civilians’ sufferings, particularly among women and children, unless an effective protection measure is taken by all parties in inhabited areas near to the combat zone”, SAM concluded.