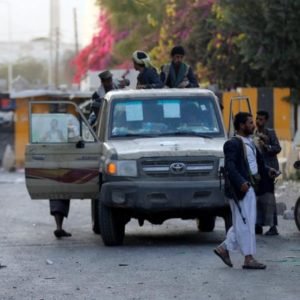 SAM Organization for Rights and Liberties monitors with great concern, the escalating violations by Houthis group against the members of Peoples General Congress, residing in areas under Houthis control, and the establishment of new prisons to detain their opponents. Houthis turn mosques and schools into prisons and detention centres, including Huzaifa mosque in Qa’ Al-Qaidhi, and 21 September medicine university in Hizyaz, southern Sana’a.

SAM organization, monitored a considerable escalation of killings, abductions, lootings and sabotage of private objects during the last weeks, in addition to displacement of tens of families related to the former president Saleh, following Houthis attack to his house and his family members’ earlier this month, in incidents ended with the killing of Saleh and arrest of his survived relatives and guards. Some of the injured were forced out of the hospitals to unknown locations. SAM has documented more than 160 killings and injured whose fate is unknown.

SAM also documented the partial or total destruction of residences, and trade stores in Sana’a city, including Sam mall and Al-Kumaim mall. However, SAM could not interview the victims, who were either displaced or feared the consequences if delivered their statements, also Houthis prevented interview of victims or photographing damaged areas.

SAM organization also documented lootings of former president house, and his relatives’, in addition to press institutions affiliated to PGC, by Houthis, where pictures depicted transforming of furniture from houses owned by leaders in the PGS were published.

SAM also received statements testify that most of Saleh dead followers were transferred to the Economic Corporation mortuary in Aser western Sana’a, and Houthis refused handing over of the dead bodies to their relatives until they pledge not to hold a funeral, and the burial ceremony is limited to their families.

On 3rd December, Houthis stormed the Consultative Hospital in western 60 street and took five of Saleh’s guards to an unknown place, according to verified statements received by SAM.

In Bani Sera’ village, in the road between Attour and Hajjah, northwest, SAM has documented the killing of 7 civilians, and execution of 4 others, including one child, by Houthis forces in this month. As well as the detention of more than 64 civilians, and displacement of 83 families.

On 3rd December, Houthis group killed Akram Al-Zurqa in Hajjah city and seven of his relatives, and detonated his house and his relative’s, injuring nearby civilians, according to witnesses.

Houthis group also executed Abdusalam Nagad, and one 10 years child, where they attacked Nagad’s house and shoot injured members of his family and detained others. Witnesses confirmed that Houthis used machine guns and RPG shells in their attack.

In Dhamar governorate, Houthis executed two injured people; Dhaifallah Zaied and Mohammed Al-Aqar, who were hiding in one mosque.

SAM organization, also documented attacks and detention of women who were demonstrating to release Saleh’s body, where they attacked the protestors by electric stick and detained more than 50 female protestors at 7 July police station. SAM has no information about their fate so far.

SAM organization calls to avert civilians from the consequences of the armed conflicts, and calls to establish an investigation committee to investigate human rights violations in Yemen, and urges international and local organizations to reveal and document these violations, and to expose to the international and local public opinion the violations in Sana’a, also urges human rights activists to  document these violations with needed evidence, to bring perpetrators into justice and ensure no impunity.