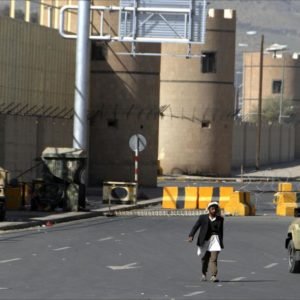 SAM Organization condemns, issuing of death sentence by Houthis militia against three Yemeni citizens including one woman, on charges of forming espionage network, and recruit of agents to UAE and to communicate and work for the so-called countries of aggression, “Arab Coalition”.

This court, convened on Tuesday, 30/1/2018, by judge Mohammed Muflih, and sentenced to death Asma Matir Al-Omisi, Saeed Mahfouz Al-Rouishid, Ahmed Abdullah Bawazeer, and 15 years imprisonment to Matir Mohammed Al-Omaisi, and confiscation of all seizures related to the case is illegitimate court.

Asma Al-Omisi, was arrested on 5 October 2016, with her father and two neighbours by Houthis, while traveling from Ibb to Sana’a, and was tortured, mistreated and disappeared, and charged with “collaboration with enemy”, due to her ex-marriage to Al-Qaeda element. Asma was detained for two months at the CID and moved to the central prison, where she was tortured, physically abused and humiliated, at the prisons of Houthis militia.

Also, hundreds of female inmates are subjected to violations daily at Houthis prisons, including torture and humiliation, adding that the female wardens lack experience and qualification to manage such prisons.

We warn against using of the judiciary as a cover up to execute abducted Yemenis at Houthis prisons, some for more than two years, and they are political activists, academia, students and businessmen, noting that the Houthis-controlled courts, lack minimum standards of fair trial, where the sentences issued does not match charges filed.

Since Houthis control over Sana’a in September 2014, death sentences increased, where on 12/4/2017, the state security court issued death sentence to journalist Yahya Al-Jubaihi, for charges of collaborating with Saudi Arabia’s aggression against Yemen, and to colonel Abdulmajeed Abdulhameed Alous, for charges of supporting the aggression and forming armed gang, titled “Northern Resistance in Sana’a”, who was subjected to torture and one year enforced disappearance. On 2/1/2018, the Specialized Penal Court, issued death sentence against Hamid Haidra, on charges related to his Baha’i Faith. Same court has issued a death sentence and confiscation of properties against president Abdorabo Hadi and 6 of his senior aides.

We are deeply concern for Houthis’ manipulation of the judiciary for political purposes, and called the international community to act immediately to stop Houthis violations, conduct an international investigation to such violations, and held perpetuators to account.

We call upon Houthis, the de facto power, to commit to the international treaties that regulate human rights and the IHL, and to exert all efforts to ensure abductees’ safety and stop these unfair trials.