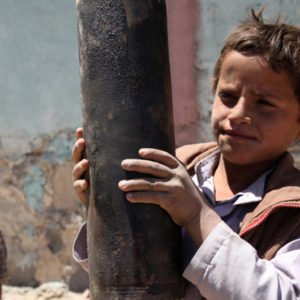 SAM Organization for Rights and Liberties, based in Geneva, is continuing in monitoring human rights violations in Yemen, during 2018, where in February, SAM has monitored 647 cases of violation to the international humanitarian law, and war law, included extra-legal killing, physical assaults, attacks on press freedom, arbitrary detention, confiscation of properties, torture, by Houthis militia, Arab Coalition airstrikes, military formations, and fighting groups loyal to the legitimate government.

It important to remind that, the violations documented in this statement, are not inclusive, nor do they provide a specific percentage of the actual violations, rather they represent a random sample through which we could see the human rights situation in Yemen, and they reflect what SAM monitors managed to document according to the monitoring standards followed by SAM.

Violation of the Right to Life:

SAM organization has monitored and documented 172 killings of civilians during February, including 66 by Arab Coalition airstrikes, 23 in Sa’da, 21 in Hodiedah, 17 in Taiz, 3 in Sana’a, and 2 in Amran governorate. Houthis militia is responsible for the killing of 94 civilians,47 in Taiz, and 33 in Hodiedah, while landmines killed 32 civilians, one civilian killed by the legitimate government forces, and 3 others assassinated; in Sana’a, Aden and Taiz governorates.

In Sa’da governorate, in the Saudi border, SAM documented on 18 February, AC airstrikes that killed 18 civilians, in Alaqiq villages, Kitaf, including 7 children, also on 25 February, 5 civilians killed including 2 children, and 12 others injured, by AC airstrike on Gababir area, in Sa’da.

In the eastern coast, Hodiedah governorate, SAM documented on 17 February, the killing of 4 civilians by AC airstrike, including 2 children. In central Yemen, in Mahees, Taiz on 10 February AC airstrike killed 8 civilians, including one child by AC airstrike, also in Taiz, Al-Qurafa village, SAM documented the killing of 4 civilians, including 2 children, by a mortar shell, fired by Houthis militia. Two civilians, one woman, also killed in Hodiedah, by Houthis mortar shelling on Khokha city.  In Hais district, Houthis militia executed Saeed Qaid on 7 February, for opposing them, according to witnesses.

Violation of the Right to Physical Integrity:

SAM organization has documented 275 injuries of civilians during February, including 30 women, and 94 children most of them in Taiz, Hodiedah, and Sa’da, mainly by indiscriminate shelling by Houthis militia, and AC airstrikes on residential areas.

SAM also documented child recruitment by Houthis militia in Sana’a, Dhamar, and Amran, as well in Shabwa by the Shabwani Elite.

SAM documented suspension cases of children from schools, due to fees imposed by Houthis militia, also received reports from students’ families that Houthis are mobilizing children with hate and intolerance speech, urging them to stop their children from attending to schools.

SAM documented 51 violations against women during the reporting period, including 21 killings, 6 by landmines, 1 by sniper’s fire, by Houthis militia, also 4 by AC airstrikes, and 28 injuries.

Houthis militia continued to use mines widely, without proper mapping thereby threatening civilians’ life at former areas of confrontation, where 82 cases of mines detonation were reported during February, killing 42 civilians and injuring 40 others, including 6 children.

Attacks on Public and Private Objects:

SAM has documented 52 attacks on public and private objects, 41 by Houthis militia, including 9 detonation and burning of houses, 4 looting of houses and companies, in addition to closure of hospital and sabotage of water project, while AC is responsible for 4 violations against public and private objects, including damage on houses, vehicles, bridge and telecommunication network, whereas 5 cased were documented against legitimate forces, including raiding a house, and 2 by unknown armed groups.