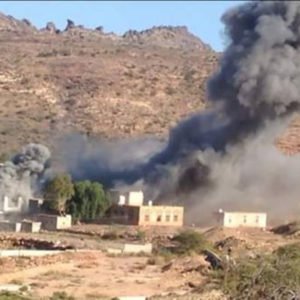 SAM Organization said that the conflicting parties in Hajar district in Addalie governorate central Yemen are deliberately attacking civilian targets causing the death and injury of civilians, mainly women and displaced thousands to other areas that lack food aids.

SAM confirmed it has documented the killing of two aged women in Alazariq district by Houthi sniper and the raid and looting of civilian’s houses.

SAM confirmed that the civilians are suffering a dire humanitarian situation due to the military operations, lack of aids and shelters and absence of relief organizations.

SAM warned that using of Katyusha missiles and tanks to attack civilians  deliberately is violation to the international law,  kyung that such weapons are inaccurate and breaches the distinction rule and is considered as a war crime according to Rome statutes of the ICC, noting recurrence of such practices by Houthis militia, indicating the deliberate targeting of civilians, according to article 8,2,h,1 of the statutes.

SAM urged the warring parties in Yemen and the international community to implement the international and humanitarian conventions related to the protection of civilians during war, especially children and women.

SAM also urged the parties to the armed conflict to bear their humanitarian and legal responsibility towards civilians and to end the war and targeting of civilians. And the UN and the special envoy to hold perpetrators accountable, stop the bloodshed and immediately interfere to save the civilians from the imminent famine that might claim the lives of millions.

SAM Organization for Rights and Liberties, Geneva 22 May 2019