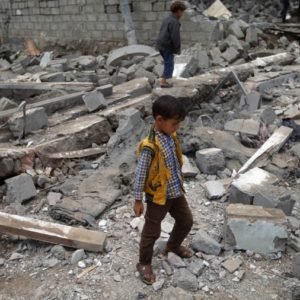 The Geneva-based SAM Organization for Rights and Liberties condemned the killing of seven civilians and injuring of four others, including three women and six children from one family in Warzan, Taiz governorate on Friday, June 28, 2019, by the Arab Coalition air force.

Sam said that the bombing took place at 4:00 p.m. on Friday, where a missile fired by the Coalition aircraft targeted the house of Abdulqawi Abdo Ahmed al-Kindi (70 years), located at his farm in Warzan area, south of Taiz province in south-west Yemen, killing 7 civilians and wounding four others.

In the details of the incident, according to the story of one of the children who survived the incident to one of his relatives, the first missile directly hit the house of Abdulqawi Abdo Ahmed al-Kindi. The owner of the house was killed instantly with all the members of his family who were in the same room with seven members including his wife and three children. About ten minutes later, the aircraft returned and targeted the other part of the house, wounding those who survived the first rocket attack. They were two women and their children were only over the age of one month.

Mounir al-Arifi, the brother of Al-Kindi’s wife, who was killed by the first shot, said the house, which was targeted is located at a large farm belonging to the victim Abdul Qawi Abdo Ahmed al-Kindi, and there is no house in the vicinity. The house is surrounded by a fence near another farm owned by Hail Saeed Anam commercial farm, which Houthis seized, and the attacked house is about two kilometers far from Houthis location, which was not attacked now or before.

President of SAM Organization, Tawfiq al-Humaidi, called on the Arab Coalition led by Saudi Arabia to immediately stop all attacks on Yemeni towns, which are densely populated and far from the confrontation areas, which pose no danger or military importance.

"Attacks on residential buildings, cause more civilian casualties, are illegal attacks, contrary to the principle of necessity and military discrimination, and constitute a clear violation of international humanitarian law in Yemen," he said.

SAM stated that the laws of war prohibit all attacks on civilians or attacks that cannot distinguish between civilians and military objectives. Article 25 of the Hague Regulations on the Laws and Customs of War on Land, 1907, provides that "the attacking or bombing of towns, villages, dwellings, and unprotected buildings shall be prohibited by whatever means."

Sam explained that the Coalition launched more than (200) indiscriminate air raid in violation of the principles of proportionality and discrimination, during the past year, resulted in the killing of more than (1200) civilians, in addition to significant damage to vital infrastructure and other civilian structures in violation of the laws of war.

SAM pointed out that the Coalition is carrying out a kind of intentional killing of civilians by insisting on repeating these strikes on a regular and almost systematic basis without any hope of conducting a credible and transparent investigation, to spare the Coalition and its military leadership international legal responsibility and to create unacceptable excuses in such crimes.

The Organization concluded by calling upon all parties involved in the conflict in Yemen to engage in dialogue, to give priority to a peaceful solution and to end the conflict in which civilians were still victims.