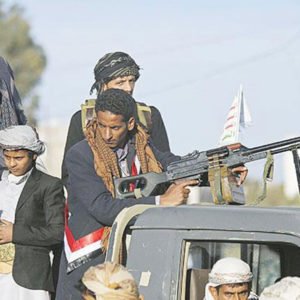 SAM Organization for Rights and Liberties condemns the killing and body mutilation of the Yemeni citizen Mujahid Qashir on Sunday 21 July 2019.

SAM saw a video clip that documented moments of Qashir's crime and assault on his body, breaking his ribs, shouting the Houthi militia chant, accusing the victim of hypocrisy, dealing with the body in a way that is contrary to human values ​​and degrading to dignity. It is clear that this video was filmed in a way similar to the of the killing of former President Ali Abdullah Saleh.

SAM also saw a handwritten document signed by the director of the security of Raida Directorate and the governorate supervisor of Houthis militia and the Director-General of the Directorate, in which the leaders justified the crimes and described them as "the best solution for controlling security and stability and restoring public tranquillity." A confirmation of the level of intimidation practiced by Houthis militias and the use of excessive force in order to control society.

SAM emphasizes that these criminal practices are prohibited in Islamic law first and in all local and international laws. Islam prohibits body mutilation regardless of the crime committed by the victim. International law requires the protection of bodies based on the Geneva Convention and customary international humanitarian law. Extrajudicial execution may not be committed under any justification, including the exceptional circumstances of the war.

SAM states that under the United Nations 1989 Principles on the Effective Prevention and Investigation of Executions, all governments must "prohibit all extrajudicial, arbitrary and extrajudicial executions and ensure that such operations are offenses under their criminal laws punishable by penal laws. And exceptional circumstances, including the state of war, the threat of war, internal political instability or any other public emergency, may not be invoked to justify such executions, and such executions may not be invoked under any circumstances, even in circumstances, including, but not limited to, situations of internal armed conflict, excessive or unlawful use of force by a public official or any other person acting in an official capacity, by an instigator or by explicit or implied consent, "This prohibition is stronger in the implementation of decrees issued by the government authority"

SAM expresses its deep sorrow over this terrible crime and calls for an end to these cruel terrorist practices and accountability of perpetrators in accordance with Yemeni law and the provisions of international law.