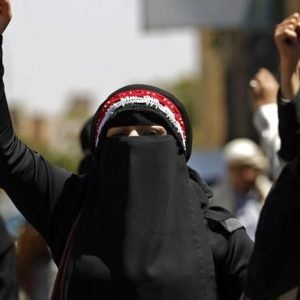 SAM Organization for Rights and Liberties said today; Houthis militia detained on Saturday 6 October some university students at Sana’a university and attached them by electric stick and other sharp tools and detained them  whitest protesting against the deteriorated economic  situation in Yeme
Houthis militia aired two days earlier abusive videos   warning from organizing the protests that coincides with
similar events at different governorstes in condemnation of the economic crisis and the prolonged war

Eyewitnesses said to SAM they saw military parade of Houthis militia at Sana’a university to coincide with the protests that the students called for earlier.
Houthis attacked the students and took their cellphones and the Houthis female insurgents the so-called Alzinabyat attacked the   female students and forced them into buses that carried them to the police stations.   Other by passers and university staff were also detained.
A female student who escaped the detention told SAM that she was beaten by armed women who stepped on me while laid in the
ground
Later on the day Alzinabyat forces attacked female students’ dormitory at Sana’a university and tampered the place and searched students cellphones

SAM confirmed that many female students are still detained and might have been moved to the central prison in Sana’a .
SAM is concerned that they might be exposed to additional arbitrary measures where it has been documented in the past at police stations and detention centers.
SAM urged the international community to act immediately to stop these gross violations against peaceful demonstrators.
Houthis aired earlier a video of inmate who (confessed) that he is related to political leaders abroad who planned these protests. Apparently the video was recorded under pressure as the film shows.

Tawfeq Al-Humedi, director of SAM said that the attacks on the protestor ate unjustified and reflects the despotic nature of the de facto power. Houthis militia closed all means of expression before Yemenis and practiced all violations since September 2014, to terrorize and silence civilians and adversaries.
SAM organization called upon the international community to interfere to protect civilians and pressure Houthis to release all detainees and ensure civilians’ right to protest and peaceful gathering according to the constitution and international conventions.