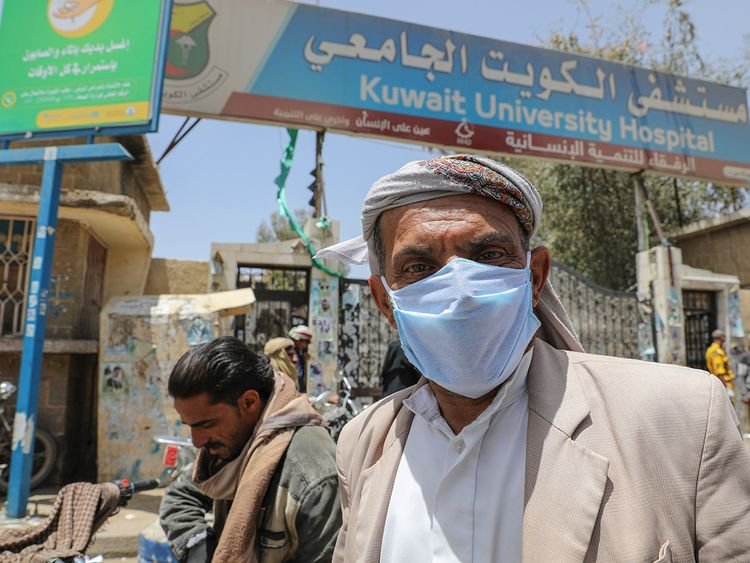 SAM Organization for Rights and Liberties, called on the international community to urgently intervene in assisting Yemen to implement the necessary precautions measures to prevent the outbreak of the Coronavirus (COVID-19) outbreak to avoid a severe humanitarian catastrophe among its civilians.

In light of recording the first COVID-19 infection in Yemen, SAM Organization affirmed in a statement issued on, Friday, April 10, 2020, the need of elaborating an urgent response plan to spare Yemenis the risk of an epidemic outbreak, in light of the seriously deteriorated health services in the country.

SAM urged all parties in Yemen to adhere to the global procedures issued by the World Health Organization in dealing with the epidemic and preventing the risk of its spread. The organization said it is following with great concern the measures taken to prevent the spread of the virus and its impact on the lives of civilians and their various rights guaranteed under the Yemeni constitution and international treaties.

SAM pointed out that Yemen recorded the first case of the epidemic in Al-Shahr city, of Hadramout governorate on April 9, 2020, while the risk of a possible outbreak increases further, which calls for more urgent measures and international support.

SAM emphasized that the spread of the Corona virus at the global level places Yemen, which is already suffering from record rates of the spread of epidemics of many diseases and poor health infrastructure, in front of catastrophic challenges and risks.

SAM highlighted that the warring parties in Yemen suffer from a significant weakness that amounts to bankruptcy, a major economic stagnation with which the state was unable to control inflation and rise in prices, as well as dysfunction of revenue generating institutions, that could contribute to reducing the economic burdens.

SAM cautioned that Yemen suffers from a major security chaos in light of the control of the Emirates and its forces on the Aden airport and its seaport, while the land and sea borders ports are controlled by multiple forces.

The organization stated that the population health indicators in Yemen, according to the WHO report are very low compared to neighboring countries, given the deterioration of medical services, in addition to the war that has been going on for five years between internationally recognized government forces backed by the Saudi-Emirati Coalition on and the Houthis militia that led to widespread sabotage and destruction in the country, including medical facilities.

The organization confirmed that 133 health facilities were destroyed in Yemen, according to the Yemeni Archive, which makes adopting an urgent national response to face the threat of a pandemic of critical importance to protect civilians as a top priority.

SAM stressed that any measures to confront the epidemic should not be a pretext for depriving civilians of their rights or restricting them, including the various basic services for the population.

The organization said that it has monitored on the level of official precautionary measures, the declaration of Yemeni Council of Ministers of internationally recognized legitimate government, of an initiative for a national fund to combat the Corona epidemic to finance the needs of the infrastructure for the health sector, establishment of national committees, at the governorate level, in addition to signing the legitimate government a number of agreements with both the WHO and UNESCO on a program to support and provide medical isolation system with medical equipment and supplies and test tools to confront the Corona epidemic, and some governorates have taken quick and strict measures with regard to quarantine such as in Hadramout, where decisions are made with the registration of the first case in the port of Al-Shahr, near the city of Mukalla, including a curfew, continued closure of markets and mosques, prevention of gatherings, and the    sterilizing campaigns in markets and streets, the closure of the port of Al-Shahr, in addition to the closure of a;-Wade’a border port with the Kingdom Saudi Arabia and Al-Shahn border port with the Sultanate of Oman except for goods trucks.

On the education sector and the right to education, SAM monitored the precautionary measures in Yemen taken by the parties to the conflict that affected the rights of civilians to education without providing real and guaranteed alternatives. Such as stopping education and closing schools and universities for precautionary reasons, but without providing electronic portals or acceptable alternatives, which deprives more than two million students, throughout the Republic of education.

In the food security, SAM monitored a significant decline in the inventory of basic commodities in different regions of Yemen, threatening to expand the humanitarian crisis in light of international reports indicating that 13 million Yemenis face food insecurity.

SAM emphasized that taking precautionary measures by the parties to the conflict in their areas of control for health issues, including closure of some markets and stores, must be accompanied by allocating compensatory budgets.

SAM also warned that the continued failure to pay salaries and wages to employees from parties to the conflict or employers threatens to exacerbate the humanitarian crisis for millions of Yemenis and complicate the humanitarian and living conditions, especially with the threat of a major organizations working in the humanitarian field to stop their activities.

SAM addressed the challenges faced by the vulnerable groups of women, children and persons with disabilities in Yemen, such as exploitation and the lack of real opportunities for life due to the years of war and continued disregard shown by the parties to the conflict the rights of these groups.

The organization noticed that no serious measures were taken to support these groups in the face of the Corona epidemic, whether for emergency or regular cases, and no budgets have been allocated for the juveniles and orphans’ shelters.

On the precautionary health preparations to confront the Corona epidemic, SAM said that the measures taken so far do not rise to the level of risk that coronavirus may pose, whether allocation of hospitals to receive infected cases or equipping specialized testing laboratories, or even raising awareness of the risks of the disease and ways to combat it.

SAM stated that lack of financial resources stand as a major obstacle in the way of taking any concrete measures in light of Yemen's suffering from a severe shortage of medical supplies and damage of the health sector during the years of the war, thereby requiring immediate and effective international intervention, namely by the WHO.

SAM also, warned of the risks of corona virus outbreaks inside prisons in Yemen, which are often illegal or secret, difficult to access or know their location, and lacking the most basic elements of public safety and care.

SAM confirmed that no serious measures were taken to protect prisoners in the prisons of the Houthis militia or armed groups affiliated with the United Arab Emirates or the legitimate government, which makes those prisons a source of threat of diseases and epidemics.

Regarding the release of detainees and prisoners, SAM noticed a limited response by the parties to the conflict, as the Public Prosecution Office of the legitimate government released more than 850 detainees on the basis of non-grave cases distributed in Taiz, Marib, Al-Mahrah, Shabwa and Aden, while the political prisoners face an unknown fate in light of the intransigence of the parties to the conflict, and their refusal to deal positively until this moment with domestic and international calls for their release.

In Sanaa, the head of the Houthis political bureau ordered to release all detainees belonging to the Baha'i community in Yemen on March 25, and the judicial authorities in Sanaa issued an order to release the journalist Salah Al-Qa’idi and the journalist Abd Al-Hafiz Hazaa Thabet, and the executive authorities still refused to implement these decisions, and orders were issued to release many detainees, whether in connection with non-serious crimes, or because of the war, especially patients and the elderly prisoners, while SAM and a number of Yemeni organizations called for international pressure to release all prisoners to save their lives.

On the African migrants, SAM highlighted that Yemen is a path for migrants from Africa to Saudi Arabia through a long and difficult journey fraught with risks, and since 2010 more than 337 thousand migrants and refugees landed in the Yemeni coast on the Red Sea and Gulf of Aden.

While the number of migrants decreased in July 2013, due to a crackdown by Saudi Arabia on illegal migrant workers, the number rose again in March 2014 and continued annually in numbers estimated at tens of thousands.

SAM pointed out to the suffering of African migrants from a series of violations of their rights, and that they are languishing in camps that lack many of the necessary and humanitarian conditions amid the risks of diseases and epidemics, and without health care, especially for children, women, and the elderly.

SAM also, warned that the failure to take precautionary measures regarding immigrants threatens a catastrophic situation in their camps, which requires the relevant international organizations such as the International Organization for Migration and the UNHCR to take urgent measures.

In conclusion, SAM called on the international community to provide urgent and emergency assistance to Yemen to help it implement necessary and effective precautionary measures, and to develop an urgent response plan to spare Yemen any infections and keep it free of the epidemic, and called on the parties to the conflict to respond immediately to calls to release detainees and prisoners  against the background of the ongoing conflict in Yemen and commit to health procedures issued by the World Health Organization in dealing with the epidemic.