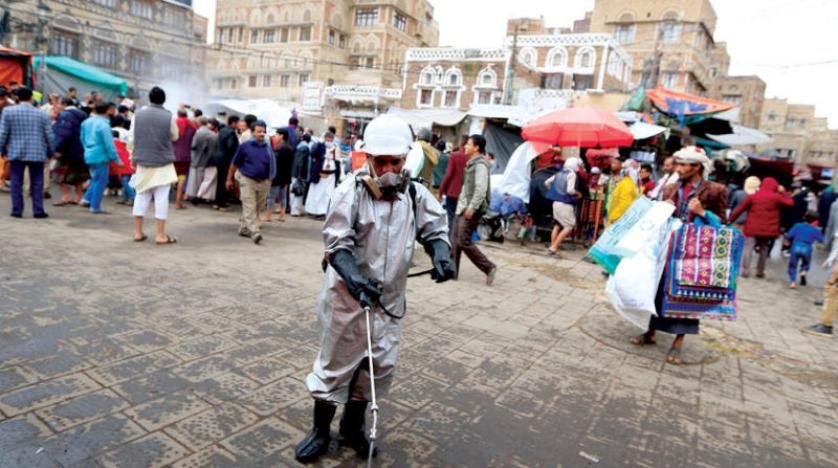 GENEVA - SAM Organization for Rights and Liberties said in a statement today, Monday 25 May 2020, that the de-facto authority of the Houthis militia in the capital, Sanaa, must deal with the Coronavirus pandemic issue with legal and ethical responsibility in accordance with the standards and medical protocols issued by the World Health Organization, mainly with transparency in announcing the numbers of casualties.

SAM said that the Corona virus pandemic has turned in Houthi-controlled areas into a security issue, as Houthis militias have assigned the security services; the Preventive Security Service, with the power to track, arrest, report, and quarantine, apart from health institutions, which is raises concerns about human rights, and is clear breach of the precautionary health measures in place in accordance with public health protocols at the global level.

The statement said that Houthis militia should stop the practices that inflict fear among society, and that make civilians lose confidence in health institutions. It must also allow health institutions to handle this issue in transparently and stop the interference of the security services except in accordance with the conditions determined by the health services as being the only one capable of dealing effectively with the epidemic and providing a clear and practical emergency plan to prevent its widespread in Sana'a and the rest of the governorates, and among vulnerable groups such as prisoners, and in markets and places with low hygiene conditions.

According to testimonies collected by "SAM", the actual number of coronavirus infections exceeds hundreds and possibly thousands of confirmed infections, while the deaths may reach hundreds, as hospitals (Kuwait) and (Al-Razi) in Sanaa and hospital (Jableh) in Ibb governorate have become centers for viral diseases and are surrounded by large and unprecedented security measures, in addition to other hospitals in the capital, Sanaa.

The statement pointed out that Houthis militia appointed a security representative in each hospital to follow up on the cases, while a source for the SAM organization said that the Minister of Health in the Houthis government disclosed in a secret meeting that Corona disease cases has reached into thousands in Sanaa, and that the ministry bury daily victims of the virus in the presence of two of their families.

According to private sources close to SAM, the Houthis militia in Sanaa is worried that revealing of the actual numbers of casualties, will cause societal and economic disorder, which leads to high prices, and thus depriving it of important revenue sources, amidst widespread poverty and hunger in a society that lives on daily sustenance and that the situation may get out of control.

A source in the health sector told "SAM" that the central laboratory in Sanaa receives about 50 people daily for testing, including 5 to 6 people who are infected with the Coronavirus. One of the medical sources in a hospital says: "The hospital receives approximately 70 cases every day, including no fewer than 10 confirmed cases, and adds ten young men died in one night due to corona." Kuwait Hospital in the capital, Sanaa, receives between 40 and 50 cases a day, according to another source of SAM, but no one can approach the quarantine area due to the security measures imposed, which made many civilians afraid to go to hospitals, where some well-to-do families resort to the purchase of an oxygen cylinder for use in homes in case of family member git infected, in light of reports that some cases went to the hospital, but died for mysterious reasons and the spread of rumors of euthanasia, which terrified many civilians and prompted them to coverup being infected. An activist in Sanaa tells the organization "SAM" that he believes that the dead in Kuwait Hospital in large numbers, but most died inside their houses,  and did not report their cases, fearing the ministry of health procedures, and the dead bodies are currently being examined based on security information. A relative of one of the victims says: "We went to bury one of our deceased relatives, and we were he surprised us with the large number of deaths in one cemetery."

The organization obtained a handwritten record entitled (Preventive Meeting Minutes dated May 22, 2020) issued by the so-called Special Committee to monitor the health situation related to the Coronavirus pandemic, in Amran Governorate, Izbat Hamda,  during which a set of precautionary measures related to the epidemic were taken. It is noticeable that the aforementioned committee is composed of security men and tribal sheikhs, and there is not a single physician among them, which reflects the magnitude of the defect in the management of the epidemic, as civilians talk about a frightening spread of the disease in Amran governorate, and that the (May 22) hospital contains dozens of infected and one of them and his father died while in intensive care unit.

The organization "SAM" also recorded the death of many infected with the coronavirus, and were buried without the presence of their families and with strict security measures. In Sanaa, dozens of bodies were buried in the areas of Shu’ub and Hizyaz, and in Jiblah hospital a source of SAM relative to one of the infected said that "after his brother was transferred to a Jiblah hospital, he went to visit him, but he discovered that he passed away one day after entering the hospital, and they, after wearing protective clothing, allowed him to see his brother in the mortuary, then took him to the cemetery with other seven bodies, without allowing any of their relatives to follow, as the security services prevented them From entering the cemetery. "

He added, "We do not know what is going on inside the quarantine centers, we were not provided with required medical reports to diagnose the disease or a death certificate. All we are able to see is the burial by the Houthi group from the gates of the cemetery."

SAM confirmed that the statements made by the residents are shocking and confirm that the continuation of the policy of concealment and the security grip with the almost completely collapses health sector may make Yemen one of the worst countries destroyed by the Coronavirus, which exacerbated the concerns of organizations operating in Yemen, particularly the United Nations, which rushed to transfer 100 of its 158 employees to the Ethiopian capital, Addis Ababa, according to its statement on Twitter.

The organization added, quoting a resident of the capital, Sanaa, that there are families who lost many of their children to the disease, without knowing the reasons or obtaining a medical report, where lack of transparency in dealing with the epidemic and poor awareness have raised great concerns among civilians and made many of them fear going to hospitals.

The statement added that handing with security measures, with coronavirus cases of the infected and their families, in conditions that are almost like security quarantine, not a health one, stigmatized the disease and generates bullying against the infected by the society, where many reported to the organization that  some hospitals refused to admit patients believed to be infected with the Coronavirus. On May 12, 2020, a woman died after most hospitals in the capital, Sanaa, refused to admit her, after which security forces imposed a security cordon on her house and imposed a quarantine of 14 days. The organization also recorded a second death in Hodiedah governorate of a 40-year-old citizen who was rushed to Al-Thawra Hospital, but the hospital administration refused to admit him because he was suspected of having symptoms of the Coronavirus, which led to his death.

SAM confirmed that the complaints received indicate to a state of confusion in the management of the Coronavirus outbreak in Sana'a, and there is a great overlap between the technical specialties and political employment. This confusion exacerbated the suffering of the residents, and lockdown and blocking at homes without alternatives or preventive assistance, which makes any measures related to quarantine doomed to failure.

On the other hand, SAM organization indicated that in the concerned authorities in the interim capital Aden, recorded 1343 deaths since May 1st, while the number of infected is increasing in light of a clear deficiency in the health capabilities and the near collapse of the rescue and emergency system.

SAM renewed its demand for the immediate release of detainees and forcibly disappeared due to the ongoing conflict in Yemen, while they are being held in inhuman prisons that lack health services, with a high possibility of the spread of the Corona epidemic and the risks that these prisons and detention centers will be a major threat to the lives of the detainees.

Consequently, SAM Organization for Rights and Liberties, called on the international community to move quickly and urgently to save Yemen from a real disaster that could turn the country into a hotbed of dangerous outbreaks of the Corona pandemic, noting the poor security situation which will further complicate  the measures to combat the pandemic.