On the International Day to end Impunity for Crimes against Journalists
SAM Organization: Politics and Economics Interests Prevent Accountability for Perpetrators of Violations in Yemen 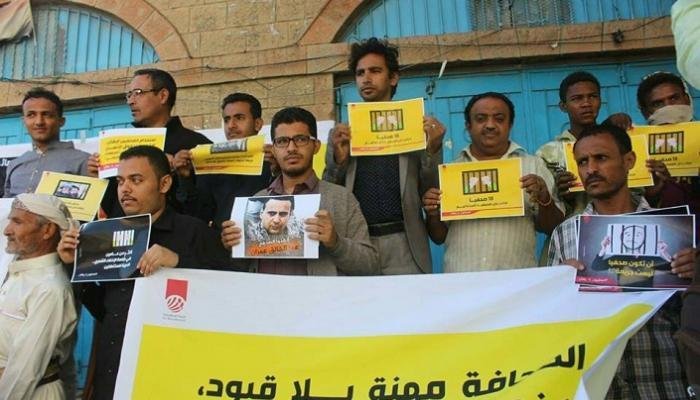 SAM Organization for Rights and Liberties said that it is ashamed of the international community’s inability to implement the principle of accountability and non-impunity for perpetrators of human rights violations against journalists in Yemen after six years of war and the death sentences against four journalists issued by a court affiliated with the Houthi militia last April.

SAM said that the lack of accountability and respect for local laws and international treaties encouraged the warring parties in Yemen to commit more serious violations of international humanitarian law and human rights law against journalists, namely the extrajudicial killings, arbitrary detention, enforced disappearances, and torture, without any serious steps to held the perpetrators of human rights violations accountability

SAM said that all parties committed violations against journalists and media workers and civil society activists, and the Houthi militia is at the top of the list of violators by 60%, while the Arab coalition committed 25%, and 10% of the violations committed by the Transitional Council, and other parties including Al Qaeda at 5%

SAM indicated that the forced displacement of Yemeni journalists, internally and externally, is still a continuous violation, especially in light of difficult living conditions, lack of work opportunities and the inability to reunite families. This puts the international community before a serious challenge in solving the problem of forcibly displaced journalists and working to provide decent livelihoods for their families.

The organization emphasized that the weak judicial system in Yemen and its manipulation by the warring parties turned it into a tool of revenge against the opponents, and forced victims to lose confidence in the judiciary, thus render the calls to reform the judiciary, and held human rights violators accountability infertile, before reforming the judicial system in Yemen and ensuring its financial and administrative independence.

SAM said that despite the progress made by the OHCHR Experts Team, including the 2019 report that recommended referring human rights violations to the International Criminal Court, political and economic interests still stand in the way of moving forward in the path of criminal accountability for human rights violator in Yemen.