SAM: The Houthi group bears full responsibility for the deaths and injuries of more than 450 migrants in an immigration centre under its control 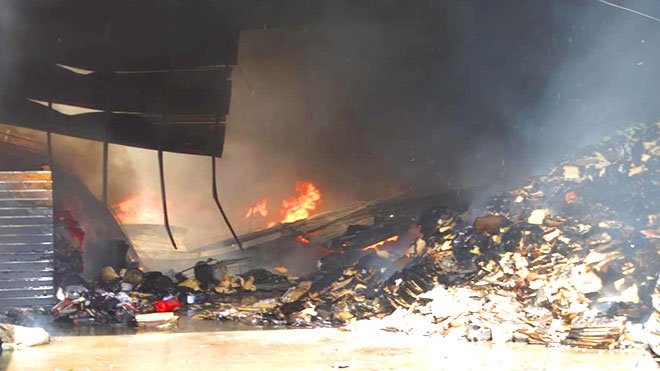 GENEVA - SAM has expressed its deep condemnation and regret at the death and injury of more than 450 mostly Ethiopian migrants in a fire at an Immigration and Passport detention centre in the Houthi-controlled capital, Sana'a.

SAM said in a statement issued on Thursday that the Houthi were directly and consistently responsible for the killing and injury of approximately 450 mostly Ethiopian migrants in a detention centre, on 7 March 2021, in a fire caused by bombs apparently fired by Houthi forces "according to witnesses who survived the incident. “To call upon the international community to shoulder its moral responsibilities, to cease ineffective rhetoric, to intervene immediately to save the rest of the migrants, to find out the consequences of the catastrophic fire and to bring offenders to justice as a matter of urgency.

The organization stated that according to exclusive testimonies from people who survived the fire, on Sunday, 7 March, at 12 noon, a number of Houthi militants stormed the detention centre - which they control - to end the migrant strike by using force, leading to clashes between detained migrants and Houthi gunmen, It developed and the Houthi gunmen started firing bullets into the air, and then put them in the center yard, after which a Houthi member dropped a bomb directly on the detainees, resulting in a fire in the rooms and buildings of the centre, killing and injuring 450 migrants, mostly from Ethiopia distributed across a number of hospitals, SAM sources report the deaths of more than 100 migrants in hospitals, and there is concern that the number is rising because of the seriousness of the injuries.

One migrant survivor detained at the immigration detention centre by the Houthi militia explained: "I watched the military drop the bomb on the detainees, because he was inside the yard, and I quickly ran into the center bathroom, and I wet my body with water, and then a lot of people came into the bathroom during the raid. I had six bodies on top of me, then I passed out, and I didn't wake up until I am in the hospital. I came back from the dead, and so far I feel like my whole body is dead from the condition I've been through. "

Another immigrant who survived the fire said: "I escaped to the bathroom when soldiers raided and bombs were thrown, and I wet myself with water, and I survived death after the door was broken by fire, and I was rushed to Al Jumhory hospital."

The organization noted that the Houthi group and the head of the Immigration and Passport Service, Abdulkarim Yahya Al-Maroni, arbitrarily detained more than 2,000 migrants, according to former detainees, and in very poor circumstances failed to meet the most basic humanitarian and legal standards, as videos shared by SAM showed before the incident dozens of immigrants are stacked in one room, without good ventilation, or personal privacy, as they are subjected to systematic blackmail by shelter management to pay for their release.

According to SAM, in early March, migrants at the detention centre began a hunger strike in protest against arbitrary arrest and ill-treatment. They also showed that the Houthi group bargained migrants to pay for their release or to go to fight among the Houthi group. "They asked us to pay 70,000 rials for every immigrant arrested in the capital, Sana'a, and 150,000 rials for every immigrant arrested outside the capital, Sana'a. Those who do not have the money go to fight in Marib, "confirming that the Houthi group abducts dozens of Ethiopian immigrants without any legal justification, despite the fact that their legal papers are valid to reside in Yemen, also stressing that the reason for this is to force those migrants to fight in their ranks in the areas they are trying to control, in addition to forcing them to participate in the war of those forces against the Saudi army on the border of Yemen.

Tawfiq Al-Hamidi, President of SAM Rights and Freedoms, said that "what happened is a real Holocaust, which reflects the mentality of flouting human dignity, disparaging the lives of migrants by assaulting hundreds by killing with deadly instruments such as bullets, bombs, torture, arbitrary arrest, forcing some of them to participate in military operations without any regard for international laws and norms, and turning them into a tool of extortion and bargaining."

Former immigrants in Houthi prisons told SAM about being subjected to cruel discriminatory treatment, and financial extortion by the Houthi in exchange for release. In Aden at “Albasateen camp”, Sam met Abdi 25 years who said " Three months ago, I was arrested in the city of Radaa, Al-Bayda Gov, by the Houthi group. They then took me to Sana'a to the passport prison, tortured me with electricity for 3 months, and asked me for 5,000 Saudis, three months later I was able to save the money with the help of my relatives in Aden and Ethiopia. " He added: "The Organization for Migration (IOM) knows our situation and everything we're exposed to, and they are just serving us food and clothes."

In Marib government, SAM met Sara 30 years old, who said: "We arrived across the sea at Aden on January 2020, and then we moved until we reached the Ruik desert. They told us that the road was closed because of Corona. We waited a lot. To get us to the Saudi border. They then brought us a Yemeni smuggler, and we agreed to pay him SAR 4,000; to get us to Al-Rako on the Saudi border, he took us across the desert and told us we'd go a little bit, and then he stopped and we came down to wait until the road opened in the afternoon. We waited till night, but he didn't come back, and we slept in the desert, and he didn't come until the second day, and we already him the full amount, and then we went back where we came to the Ruik desert.

After that we crossed on foot towards Al-Jawf governorate, and we reached Sadah, we were arrested in Sadah and they took us to Sanaa, put us in prison, and at that time I tried to contact my family and the amount that we must pay within one week, which is one thousand five hundred Saudi riyals, was transferred, then they deported us to Aden to return to our country, but we were not able to return due to the war and the Corona pandemic. We went back to Marib, and so far it's been a whole year sleeping in the desert under this tent...she added, there are more than 700 girls in prison who were unable to reach their parents because of the disruption of the network were still in prison because of the conflict there.

Another guy named Roro, 27, says: I was arrested in March 2020 in Sadah, and we were over 800 people, and after five months of detention, we were deported to Sana'a, we were admitted to a prison full of sewage for two months, we weren't sleeping well, until I was able to communicate with my parents and I paid 1500 SAR, and they deported us to Aden.

SAM, for its part, said that statements by the relevant authorities in the capital, Sana'a, whether of the United Nations or of the Houthi group, on the number of victims had not reached the crime level, stressing that this statement could contribute to grave violations against migrants, with hundreds of them still being arrested by the Houthi group at this moment. It raided a number of Ethiopian immigrants' homes after the incident in the capital, Sana'a, and confiscated a number of their personal phones, calling on United Nations institutions operating in Yemen to shoulder their legal and moral responsibilities towards civilians there.

At the end of her statement, SAM called on the international community, with all its components, to act urgently and to work towards the establishment of a transparent commission of inquiry to investigate the effects of the migrant camp fire in Sana'a, and to ensure that all those responsible for this crime are held accountable, at the same time, Sam stress on the need to accelerate the efforts of the United Nations to stop all violations of human rights in general and of migrants in particular and to start implementing a comprehensive plan that will ensure the cessation of the use of excessive weapons and force by the security and military forces, and to ensure security and stability in Yemen.