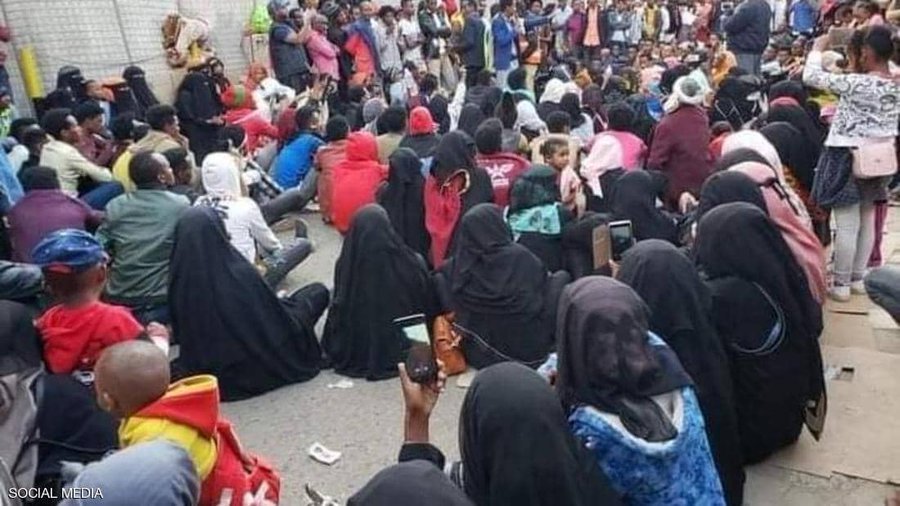 Geneva - SAM strongly condemned reports that members of the Houthi group killed two migrants in front of Commission for Refugee in Sana’a and injured dozens as its forces broke up a migrant sit-in to protest the deaths and injuries of hundreds of migrants in a detention centre of Immigration and Passport Service controlled by the Houthi militia.

In a brief statement issued on Saturday, the organization stated that hundreds of migrants had begun a sit-in open to UNHCR on March 8 in protest against the violent incidents that had taken place at the immigration centre in early March which killed 450 migrants, mostly from Ethiopia, and injured more than 1,500 others, but the Houthi group threatened them more than once  to break up the sit-in if started and as the migrants insisted on continuing their sit-in, Houthi forces raided the sit-in on the morning of Saturday, 3 April 2021, at 6 a.m. The place was surrounded, tear gas was thrown and people were sprayed with water, and then heavy bullets were fired on them as well.

SAM stated that, according to reports, Houthi intervention had resulted in the deaths of two of protesters, as well as in the arrest of hundreds of persons, 410 of whom had been arrested, including 210 women, 30 children and 170 men, including 45 Somali migrants, who had been loaded into five trucks, photographed and fingerprinted in the city of Dhamar. They were then moved and thrown out in the open between the town of Damt and Yafa in a border area where there were constant clashes between the legitimate government and the Houthi group.

SAM mentioned that the Office of the United Nations High Commissioner for Refugees (UNHCR) had not yet issued a statement in response to the Houthi group's rejection of the protest of migrants by force and the use of bullets, expressing its displeasure with UNHCR's negative attitude from the beginning of the violence in the immigration detention centre to the present day, stressing the need for UNHCR to assume its legal and moral responsibility for Houthi group attacks against immigrants.

SAM concluded by calling on all parties, primarily the Office of the United Nations High Commissioner for Refugees (UNHCR) and the United Nations Envoys to Yemen, to shoulder their responsibilities and to press the Houthi to stop their practices contrary to international law and criminal accountability of Houthi offenders for crimes committed against refugees and calling for a full protection for refugees and migrants and for the establishment of centres under international supervision that provide them with legal protection and basic requirements, free from political attractions and the consequences of military operations.