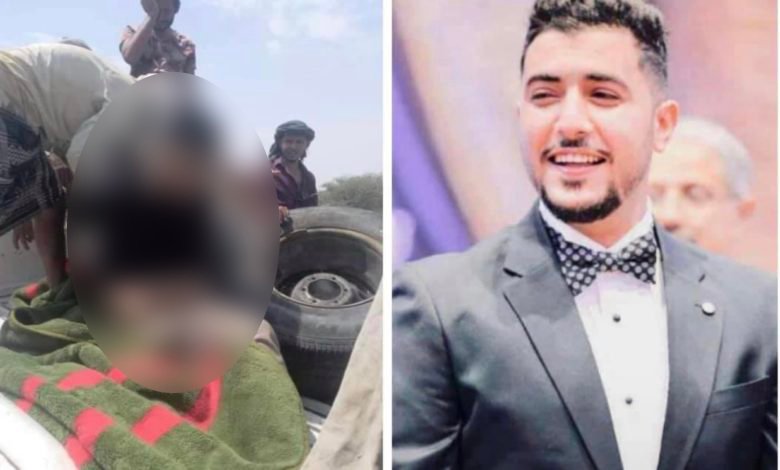 SAM Organization for Rights and Liberties said that the young Yemeni man, Abdul-Malek Al-Sanabani, 30 years old, from Dhamar Governorate, north Yemen, of American citizenship, was killed at Tor Al-Baha point in Lahj governorate on Wednesday, September 8, 2021 after he had been arrested by an armed point belonging to the 9th Strike Force Brigade of the Transitional Council.

The organization said in a statement issued today, Friday that the young man "Al-Sanabani" was killed while returning from the United States of America via Aden airport, where he was subjected to arbitrary detention, torture and confiscation of his money before he was killed on charges of belonging to the Houthi group.

The organization said that there are many evidences confirming the brutality of the security services of the Transitional Council in the practice of violations against civilians as arbitrary arrest, torture, enforced disappearance and night raids on homes have become almost daily behavior in the city of Aden, and many armed points have raised fears of many civilians to turn them into a means to blackmail travelers. as testimonies of victims who were arrested from armed points exposed the absolute violation practiced by these forces and not to hold the aggressors accountable sends clear signals to these forces that they can continue to practice their violations and impunity without any accountability for these crimes.

On Friday, September 10, the Minister of Foreign Affairs of the legitimate government twitted on his Twitter page, "What happened is completely condemned and must be investigated and the convicts should be brought to justice."

Al-Ayam newspaper, a newspaper which is issued in Aden Governorate, published yesterday, Thursday, September 9, 2021, two statements, the first attributed to the media advisor of the local authority in Tor Al-Baha district, Jalal Al-Suwaisi, explaining the reason for the arrest, claiming that “they received a report about the abnormal presence of the young man, al-Sanabani, at the Al-Farsha junction station, and he took pictures of military sites and had an amount of money in US dollars.” while the second attribution was to the commander of the Tor al-Baha point, Muhammad al-Nashiri, "that they were able to arrest a person suspected of being a Houthi element as he said: As soon as we received the report about his presence at the Al-Farsha Junction station with suspicious movements, we informed the individuals to be cautious, and we thoroughly searched all the cars passing in the direction of Taiz until we found him." He was riding in a car, and then we took him down from it, but he managed to escape immediately. The personnel of the point spread and chased after him until we were able to arrest him after he had run more than half a kilometer on foot. The Transitional Council statement added, "Al-Sanabani's escape and his insistence not to search his bags is evidence that he is a leading element of the Houthi Rafidah."1

In another different statement, published by the website of Roiat Watan yesterday, Thursday, September 9, 2021, attributed to the 9th Strike Force Brigade of the Transitional Council, which is stationed in the Tor Al-Baha sector in al-Sabiha in Lahj, in which it was stated: “They transported the young man to BP Hospital in Al-Buraiqa in the interim capital, Aden, after he had a traffic accident which led to him falling out of the car he was in.”

It is noteworthy here that the murder of the young man "Al-Sanbani" drew widespread condemnation and denunciation among activists on social media who demanded the formation of an impartial investigation committee into the death of the young man and the arrest of those accused of killing him, and the need to take the necessary legal measures against them.2

According to private testimonies, signs of torture appeared on Al-Sanabani’s body and bullets were fired in his back and leg, which confirms beyond any doubt that the justifications and disavowal by the Transitional Council from the incident are unacceptable and raises great doubts about the involvement of its members in the incident.

In addition, the conflicting statements made by officials in the Lahj governorate of Tor al-Baha raises many doubts about their validity, especially that the young man al-Sanabani, who was returning from America, has been an expatriate for ten years, and he has no relationship, and no political activity or loyalty to the Houthi group, but it seems that The accusation of belonging to the Houthi group has become a hanger for the forces that practice violations in their areas of control as there were many arbitrary arrests, torture and extrajudicial killings, the latest of which was the arrest of the young man, Al-Riyashi, from Aden Airport, monitored.

For his part, Tawfiq Al-Humaidi, head of the "SAM" Organization for Rights and Liberties, said, "It appears that the armed forces of the Transitional Council, which was established by the UAE, are practicing violations in light of almost complete impunity and the absence of oversight of any kind, especially after disabling judicial institutions and controlling the joints of the state in Aden by the Transitional Council.

He added: "During the last period, we monitored the escalation of the illegal issuance of detention orders, arbitrary arrests, night raids and mediation releases, in addition to private prisons in which people are arbitrarily and forcibly placed, which made the areas under their control constitute an escalating danger and a real threat to the life, physical integrity and private property of civilians.”

SAM stresses that turning armed points, and non-state forces which are far from any legal or judicial authority, into an additional obstacle for civilians whose daily interests have been harmed due to the arbitrary practices committed at the points by these forces, also reflects a negative image of the security situation, and fails any attempts at a smooth and safe transition to a state of relative stability.

"SAM" concluded its statement by stressing the importance of opening an urgent investigation into the repercussions of the incident, bringing violators to a fair trial, and the need to conduct a comprehensive review of the practices of the organs and individuals affiliated with the Transitional Council accused of committing serious and unjustified violations.