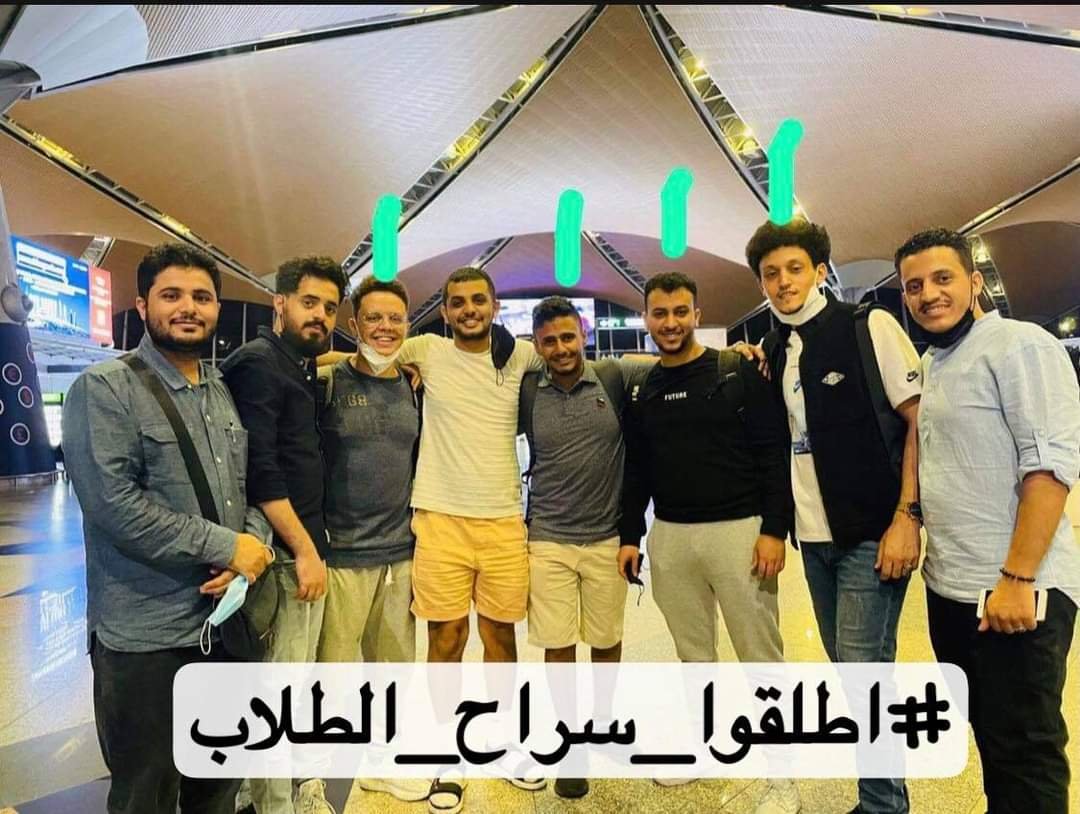 Geneva - SAM Organization said that forces affiliated with the Transitional Council are arbitrarily detaining four Yemeni students returning from Malaysia through Aden Airport in Badr camp since their arrest on September 4, 2021, stressing the need for their immediate release without conditions as this constitutes a clear violation of freedom of movement and physical safety guaranteed by international law.

The organization stated in its statement issued on Saturday that the two students, "Ibrahim Ahmed Muhammad Al-Shahari, and "Yahya Mansour Al-Ariqi," both majoring in telecommunications engineering, had completed their undergraduate studies at APU Malaysian University and returned to Yemen permanently while the student "Ahmed Mueen Al-Madani" ,in the last year of his studies, returned to visit his family, and the student "Hussam Tariq Al-Shaibani" is a new student who registered at LIMKOKWING University and returned to visit his family before returning to start studying.

"SAM" indicated that according to one of the detained students, the four students traveled from Kuala Lumpur International Airport at 11:00 pm on September 2. Then they stayed at Khartoum Airport on September 3 and arrived at Aden Airport at 4:30 pm via Al-Saeeda Airlines on September 4, 2021.

According to the relatives of the student "Al-Shahari", there was a car belonging to "Salim Sanad" that came to take him to Sana'a, and after leaving Aden Airport, the students communicated with one of their colleagues in Aden where they agreed to meet in the Aden Beaches Restaurant, one of the restaurants near the airport, their friend went and waited for them for five hours, and when they did not attend and did not answer his call, the search began and he asked about them. He learned that an armed group had arrested the four students in addition to the driver of the car where they were taken to the criminal investigation. After the students’ families had communicated, they found out information that their sons had been transferred to the Badr camp.

"SAM" contacted the father of one of the students, who told the "SAM" team that "their sons are not involved in politics and their families were waiting for their sons at seven in the morning, but unfortunately the family was shocked by the news of their arrest, knowing that their sons were arrested without a clear reason."

SAM indicated that one of the relatives it contacted confirmed that there was an inconsistency with security officials in Aden, and attempts to deny the incident, and some alluded to the existence of a dispute with a close relative of the security men in Malaysia, which led to the arrest of those students, while the information showed that those responsible for the arrest are "Mustafa Abu Ali" and "Abdul Rahman Askar".

"SAM" stresses that the persons responsible for the abduction of the four students have violated a number of legal texts and rules that guarantee freedom of movement and criminalize arbitrary arrest and threatening the freedom and safety of people without legal permission or a judicial decision, stressing that what happened with the students is a full-fledged kidnapping crime that required the security authorities that control the city of Aden to take urgent action and reveal their fate instead of the policy of unjustified silence regarding the serious violation that occurred there.

The human rights organization emphasized that the city of "Aden" has become a city of fear controlled by militias that follow the STC away from the supervision of the judiciary, especially with the escalation of night raids on homes, arbitrary arrest and enforced disappearance of dozens of people without legal reason or judicial oversight, which requires urgent action by All international and governmental parties to put an end to the persistence of the militias affiliated with the Transitional Council.