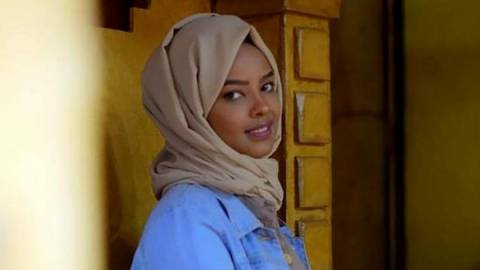 Geneva - SAM Organization for Rights and Liberties condemned the judicial rulings issued by the court in western Sana’a, which is under the control of the Houthi militia, against four Yemeni women today, Sunday, November 7, including the Yemeni model, Entisar Al Hammadi, stressing that these rulings violate the principles and conditions of fair courts and were not based on any legal evidence that convicts them.

For its part, "SAM" indicated that "Al-Hammadi" was arrested on February 20, while she was on her way with a filming team in one of their sessions. Her lawyer, Khaled Al-Kamal, said in statements to news websites: “The arrest took place without a warrant and without any charges being brought against her,” and he referred to “attempts to defame her,” including rumors of her being involved in prostitution and drugs.”

It is noteworthy here that "Al Hammadi", 19, is a Yemeni daughter of an Ethiopian mother, and works for several local designers as she posts pictures of her wearing traditional Yemeni clothes or leather jackets on her Facebook and Instagram accounts, which are followed by a few thousand people.

The organization stated that it had previously called for the release of "Al-Hammadi" and the others, expressing its condemnation of the statements made by "Al-Hammadi" previously about "the Houthi militia's request from her and the girls to perform sexual acts which violate public morals and Yemeni and international law."

The organization concluded its statement by calling on the Houthi militia to immediately and unconditionally release the female detainees who have been sentenced to prison terms, stressing that these trials are sham and violate the principle of fair trial and the right to defence. SAM also stresse its rejection and condemnation of the behavior of the Houthi militia to force female detainees and abducted women to engage in acts contrary to public morals "under any pretext."

The organization also called on the Houthi militia to open a serious investigation into the allegations that were published indicating the militia's involvement in the establishment of secret prisons for the purpose of sexual promiscuity and the need to bring the perpetrators of such acts to a fair trial. It also emphasized the importance of releasing all abductees by the Houthi militia and working to close all prisons where thousands of people are held without legal charges.