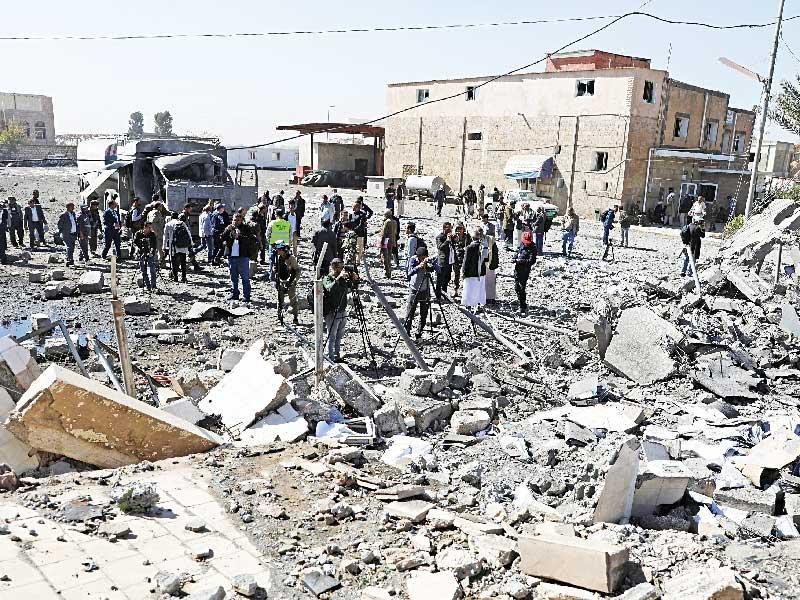 SAM said: The airstrikes of the Saudi-Emirati coalition on residential areas in Sixty (Al-Siteen) Street, north of the capital, Sana'a, on January 17, 2022, resulted in the killing of 10 civilians and the injury of others, including five women, in serious  violation of the Geneva Conventions and the Hague rules that guarantee the full and special protection of civilian objects, indicating that such practices amount to war crimes that require criminal accountability.

The organization indicated in a statement issued today, Tuesday, that the coalition aircraft launched airstrikes yesterday, Monday, January 17, 2022, targeting the director of the Air College in the capital, Sana'a, which apparently came as a reaction to the Houthi group's targeting of (Abu Dhabi) airport by drones on Monday. The attack which in turn led to the death of three civilians and the wounding of six others of foreign nationalities, according to Emirati media.

"SAM" confirmed that the bombing included the house of Faisal Rajab, the military leader affiliated with the legitimate government and detained by the Houthi group, as well as two other houses, with more than 10 civilians killed or wounded, which led to the imposition of a security cordon by the Houthi group and the start of retrieving the corpses.

One of the testimonies of an eyewitness and relatives of the victims which was obtained by “SAM” showed that “the bombing of the coalition aircraft targeted the Libyan city next to Al-Iman University on Sixty Street, where the house of the leader (Al-Junaid) was bombed, and his wife, children and other guests were present during the bombing. It also included the bombing of the house (Faisal Rajab), which was inhabited by his son-in-law Ali Al-Ahdal, and a neighbor was there, in addition to tenants.

He added, "What we were able to retrieve was seven bodies, taking into consideration that there are still dozens of missing people, with the difficulty of retrieving the injured and searching for the missing because of the flying of the coalition's aircraft." He also added, "Thank God, Ali Al-Ahdal's family was in Aden, while Al-Ahdal himself is still missing until now."

SAM confirms that this targeting of civilian objects and populated cities, without any respect for the rules of engagement, constitutes an unjustified violation of the Geneva rules which criminalize any attack or threat to civilian objects and facilities, stressing that such practices may amount to a war crime that requires international accountability.

SAM" renews its call to all parties to the conflict to stop their violations and targeting of civilian facilities and to work to respect the rules of international law by sparing civilians and their whereabouts the consequences of the ongoing conflict between those parties, emphasizing the importance of the international community's move to pressure all parties to stop their violations and work to prioritize the interests of civilians over political and military calculations.