On the International Day of Mine Awareness the number of mine victims in Yemen reached (6,018) civilians and (5199) public and private facilities
SAM calls on the United Nations and the specialized committees to make more effective efforts to end the mine file that kills civilians in Yemen 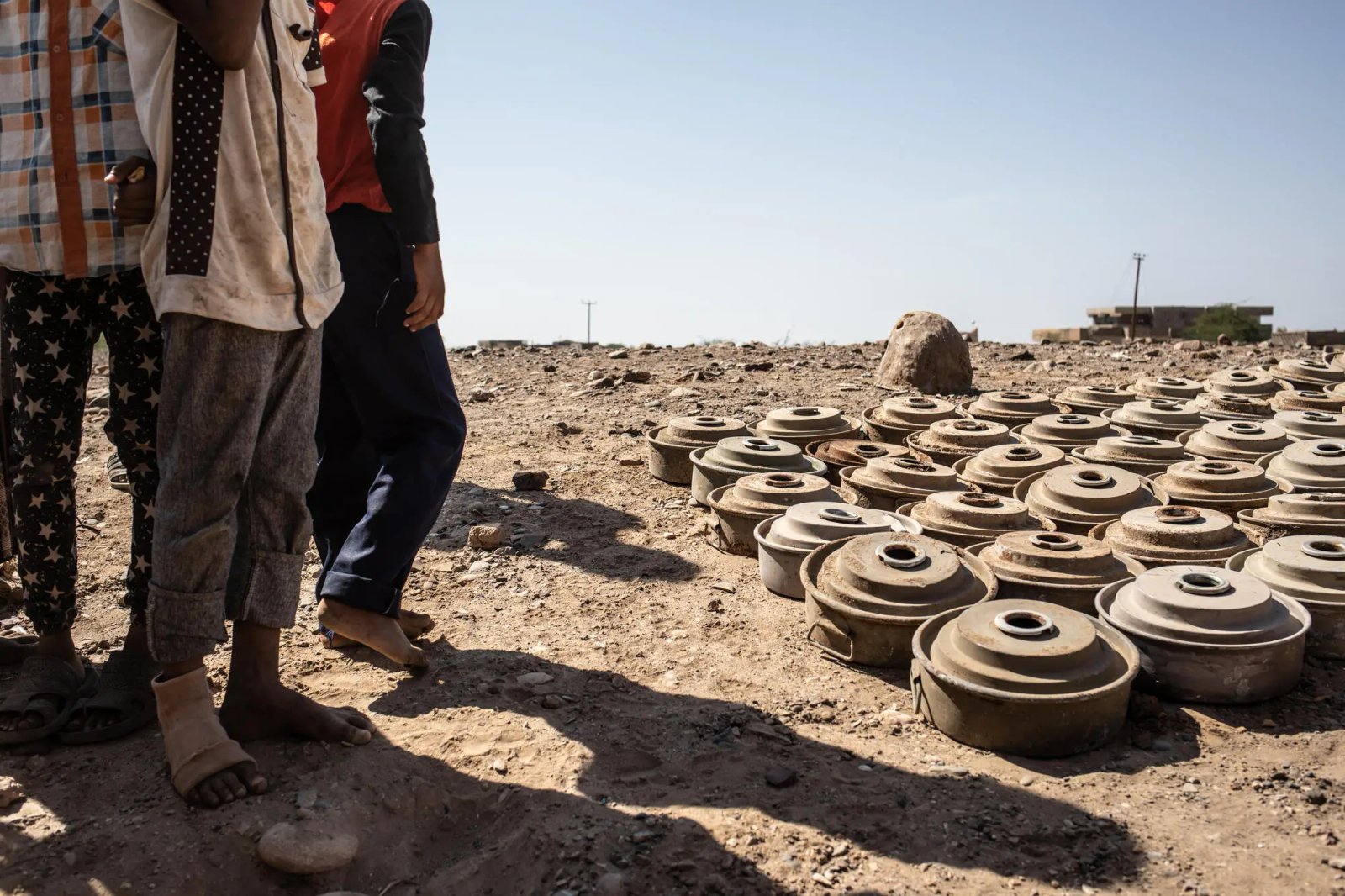 Geneva - SAM Organization for Rights and Liberties called on the United Nations and its affiliated task forces on mines to play a larger and more serious role regarding the issue of mines planted in Yemen, which kill civilians on a daily basis, leaving serious impacts on the humanitarian and economic levels and on civilian objects and to work to implement the relevant rules of international law, the most important of which is to send specialized international committees to purify the areas, especially the places where civilians are.

The organization indicated in a statement issued today, Monday, that the figures monitored and documented by human rights organizations and centers specialized in demining during the past years of war in Yemen confirm that hundreds of civilians have been killed or injured, including women and children whereas thousands of civilians are still at risk, especially in the governorates witnessing battles and armed conflicts, such as Al-Hodeidah, Taiz, Al-Jawf, Al-Bayda and others, where Taiz governorate is considered one of the most affected governorates by the planted mines compared to the rest of the governorates.

According to the numbers monitored and obtained by “SAM” Organization for Rights and Liberties from various sources, including the “Masam” Project for Mine Clearance, the total number of civilian victims of mines and civilian facilities in Yemen as a result of their explosion during the period covered by the report (2014-2022). The number of mine victims reached (6018) civilians, including (2632) dead and (3386) injured. The material losses included (4743) private establishments, while the losses in the public establishments amounted to 456.

The documented cases of those killed by mines included (477) children and (168) women while the number of children injured by mine explosions reached (730), and the number of women injured by mine explosions reached (219). On the other hand, the damages to private civil facilities included (1005) houses which were completely destructed, whereas (464) houses were partially damaged, and (167) commercial facilities were partially and completely damaged. (344) farms were damaged, and (2185) livestock owned by citizens were killed and injured.

The human rights organization highlighted this discrepancy in the number of victims on its part due to several reasons, the most important are: the governorates witnessing military confrontations that are still ongoing, as well as the areas of internal conflict such as Taiz governorate in central Yemen, Hodeidah in western Yemen and Marib in the east where the military confrontations are still going on, and the areas controlled by warring parties which are overlapping, where  the Houthi group, as a single party, plants mines to impede the progress of government forces or to take revenge on the population if they leave a certain area.

In addition, the Houthi group plants mines in areas close to the population, public roads, farms and places of grazing without maps, which makes it difficult to locate these mines. This contributed to a significant increase in mine-related incidence, especially in the governorates of Taiz and Hodeidah, where the Houthi group tends to kill as many civilians as possible by planting mines in large and random areas.

The organization indicated that there are a number of challenges facing the local authorities in clearing mines, the most important of which are: The random fields and the absence of accurate knowledge of the maps of the mines laid in the areas after they are free of military confrontations and the dangerous camouflage of the locally manufactured bombs and mines and their traditional installation method.

Moreover, the transformation of anti-tank mines into individual mines and the use of homemade pedals has become an obstacle for the specialized teams to dismantle those mines. Also the spread of planting mines in unexpected places, such as paved roads, in front of and inside houses, under trees, and other place, in addition to planting mines in areas that were cleared for the first time, then planted for the second time, and then cleared for the second time and planted for the third time, and now the Masam project is clearing them for the third time, such as the Al-Jawf areas, noting that there are technical challenges on the ground resulting from the lack of experience, sufficient teams and the necessary support, and the continuation of the conflict in Yemen.

For its part, the organization stresses that the health, psychological and social suffering of mine victims is exacerbated by the weak health infrastructure and the inability to provide treatment, especially prosthetic limbs. Most of the victims travel abroad for treatment, and they go to other countries such as India, Egypt and the Sultanate of Oman, under harsh financial conditions that force some of them to sell their personal belongings for treatment while some may find help from charities or philanthropists. One of these examples is the Arabic Center for Prosthetic in the Sultanate of Oman, neighboring Yemen, where a medical project targeting war-affected amputees was opened and it was founded by "Hammoud Al-Mikhlafi" and according to the center's guide project, it is a humanitarian and charitable project established to serve the wounded Yemenis with the support and facilities of the Sultanate of Oman and is headquartered in Salalah.

The human rights organization noted the role played by the Masam Project for Mine Clearance, funded by the Kingdom of Saudi Arabia, whose engineering teams since the project launch on July 1, 2018, until March 18, 2022 managed to demine 326,699 mines, IEDs and unexploded ordnance, and cleared 31,870,697 square meters of Yemeni lands that were booby-trapped with unexploded ordnance, mines and IEDs.

SAM confirms that in spite the aforementioned efforts and logistical efforts by the UN agencies through their projects and programs, which have made good achievements despite the complex circumstances; however, the continuation of the fighting on multiple fronts, have made the suffering of Yemenis continue as a result of the mines planted massively and indiscriminately by the Houthis in different areas without maps that facilitate the work of demining teams, which poses a direct threat to the population amid the increasing numbers of civilian victims, the majority of whom are women and children.

SAM stresses that the use or possession of mines is prohibited under relevant international treaties and covenants, such as the Ottawa Mine Ban Treaty, the United Nations Convention on Certain Conventional Weapons and the Rome Statute, which considered mines targeting civilians who do not participate in military operations a practice that may amount to war crimes that require accountability, along with the Universal Declaration of Human Rights and the International Covenant on Civil and Political Rights, which incriminate any violation of physical integrity or the right to life.

The organization concluded its statement by calling on the United Nations and the mine action to move seriously and effectively to contribute to end the file of mine violations in Yemen through several steps, the first of which is to communicate with the Houthi group to locate these mines, and then work to send specialized teams to dismantle them, as well as the need to provide basic health and psychological services to mine victims and the formation of a special fund to support and compensate Yemenis affected by those mines.