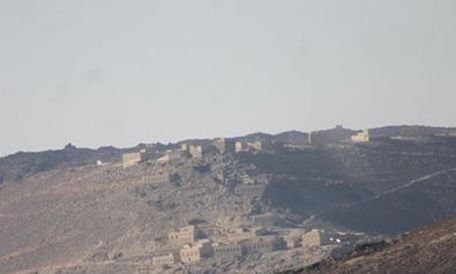 Geneva - SAM Organization for Rights and Liberties said that the Houthi group is committing grave violations of international law by imposing the siege on the village of "Khabza", one of the villages of the "Qurayshih" districts in Qaifa, Rda’a, Al-Bayda Governorate, belonging to the tribes of "Al Mohan Yazid" and it is inhabited by about 1,800 people.

The organization stated that the Houthi group does not allow the population to move and imposes many restrictions on the movement of individuals and citizens. This thing deprives the village, which suffers from difficult economic, social and life conditions, of providing basic requirements which requires the immediate lifting of the siege and the accountability of the people responsible for the attack on the village.

The organization stated in a statement issued today, Wednesday, that the siege on the village began on July 12, after the Houthi group claimed that its checkpoint was subjected to an armed attack resulting in killing one person and wounding another although the point is more than 5 km away from the village. This claim was denied by the villagers.

"SAM" indicated that despite the meeting of the village's sheikhs and local notables with the Houthi supervisors and their signing of a document of innocence - which the organization reviewed - of the perpetrator who carried out the attack if it was proven that they were residents of the village, the group’s gunmen imposed a stifling siege on the village from all directions and prevented the entry of medicine and food to the villagers, in addition to preventing the people from leaving the village to carry out their work and sell qat, which they depend on to earn their livelihood to the extent that situation of the villagers became unbearable.

The siege caused the death of the 13-year-old girl, "Aya Saleh Muhammad" as the Houthis prevented her family from taking her to a hospital in Rada’a city after a stone had fallen on her head. The girl was bleeding out while she was at one of the Houthi checkpoints that prevented the car from passing until she died.

The organization said that since yesterday, Tuesday, July 19, the Houthi group launched an attack that is still ongoing, targeting the homes and properties of the civilians in the village with various heavy weapons, which resulted in killing ten civilians, including two girls and a woman, and wounding at least seven others, while a number of residents are still missing and their fate remains unknown until now. More than eight houses were damaged and burned, in addition to the damage to drinking water wells and citizens’ qat farms.

The organization indicated that these are not the first violations this village is subjected to. According to human rights and field sources, the total number of violations since the Houthi group invaded the village on November 14, 2014, reached about 800 violations that varied between killings, executions, kidnappings, blowing up houses, shelling houses and farms with all kinds of heavy weapons, displacing residents, targeting the displacement places, shelling the schools and medical centers, burning and destructing water wells, killing sheep, cows and livestock, and disturbing people’s interests.

"SAM" stressed that the armed Houthi militia turned the village of "Khabza" into a ghost village due to the destruction and devastation as it killed about 43 civilians, including an old man, a young man, a woman and a child, and injured about 86 others. Also, more than 257 families were displaced from the village, 16 houses were completely flattened, 30 houses were partially destroyed, and about 50 houses were damaged. Furthermore, a school and a health unit, which was a house of a citizen and was emptied to receive the wounded civilians, were damged, as well as two mosques, one of which was completely destroyed and the other damaged. The rest of the houses suffered varying damages and all houses were looted without exception, noting that it was monitored that the Houthi group looted about 8 shops, burned 4 water wells, destroyed 3 cars due to the bombing, and looted 7 other cars after the Houthis took control of the village.

In addition to field executions committed by the militias against the residents of the village of Khabza, some of whom were among the 28 people kidnapped from checkpoints in the Qaifa and Rada’a areas, while some were among the wounded in hospitals.

The organization emphasizes that the Houthi group’s practices against the village of “Al-Khabza” seriously violate the rules of protection guaranteed by the norms of international law, especially the Universal Declaration of Human Rights and the Geneva Conventions, stressing that the deliberate targeting of civilians with missile attacks and armed attack entails criminal responsibility against the group and requires real action to stop violations committed by the armed militias.

The organization concluded its statement by calling on the international community to pressure the Houthi group in order to ensure the fulfilment of human rights demands to lift the siege on the village and allow the residents to practice their normal lives and work to provide adequate and urgent support to expedite these efforts, and to achieve the international deterrence policy through international criminal accountability that will ensure the cessation of any future violations at the hands of these armed groups.