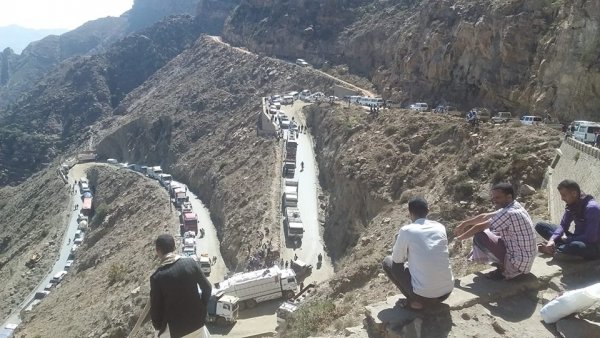 The main roads in and out of the city of Taizz have been closed since 2015 by Houthi forces, severely restricting freedom of movement for civilians and impeding the flow of essential goods, medicine, and humanitarian access to the city’s residents.

“Houthi restrictions have forced civilians to use dangerous and poorly maintained mountain roads that are the only connection between Taizz city’s besieged population and the rest of the world,” said Michael Page, deputy Middle East and North Africa director at Human Rights Watch. “Opening the main roads would help immensely to alleviate the suffering of a population that has been in near-total isolation for seven years.”

Taizz is between the capital, Sanaa, controlled by the de facto Houthi authorities, and the port city of Aden. Houthi forces have surrounded Taizz since 2015, isolating the city and blocking access to all major roads connecting Taizz to the rest of the country, while government-backed forces control the city center. The humanitarian crisis in Taizz is particularly severe.

The International Committee of the Red Cross has said that “the severity of food and water needs is dangerously acute in Taizz.”

Houthi forces should ensure that all civilians can safely leave any area of potential danger and that any restrictions on freedom of movement are only temporary and for reasons of imperative military necessity, considering the ongoing truce, the groups said. The Houthis should ensure free and safe movement for all humanitarian personnel and facilitate the delivery of food, medical supplies, and other essential items and services to the civilians in the city and throughout the governorate.

There has been little progress on opening the roads, despite UN efforts. The UN announced a two-month truce, starting April 2, 2022, which included a provision for its special envoy for Yemen, Hans Grundberg, to “invite the parties to a meeting to agree on opening roads in Taiz and other governorates to facilitate the movement of civilian men, women, and children.”

Following negotiations in Amman on July 3, the Office of the Special Envoy shared plans for a phased reopening of the roads in Taizz to help alleviate civilian suffering. But the Houthi authorities rejected the proposal, prompting rare criticism by the EU delegation to Yemen, who said that “the EU deeply regrets a rejection by the Houthis of the latest proposal.”

The Houthis have blocked access to the main roads leading northeast, toward the Hawban region, as well as the roads leading north and northwest, linking Taizz city with the rest of Yemen. A trip from Taizz city to the Hawban region would take approximately 10 or 15 minutes before 2015, but now takes 6 to 8 hours. To leave Taizz city, residents have been forced to take the mountainous, unpaved al-Aqrodh road, a more than 60-kilometer detour that circles far around the city. Al-Aqrodh is winding and narrow, with sharp switchbacks and numerous government and Houthi checkpoints.

One resident of Taizz city told the groups, “There are daily casualties and accidents because of the state of the road; it is full of suffering and losses every day.”

The main roads connecting Aden to Taizz are also closed by the Houthis, forcing civilians to take the notoriously treacherous Haigat Al-Abd road to Aden. “Some people call it the death road,” the resident of Taizz city told the groups. “It is full of holes and not in good condition, but the people do not have any substitute.” The Haigat al-Abd road is narrow and unpaved, twisting through steep mountainous terrain. These conditions make it incredibly difficult for large lorries, other trucks, and buses, which carry vital goods and passengers, to navigate the sharp bends and precipitous traverses without accidents.

Residents of rural areas of Taizz governorate have long traveled to Taizz city for essential health care, such as dialysis or chemotherapy. Prior to the Houthi forces’ siege of the city, these routes were manageable. Today, journeys that previously took one hour can now take up to eight hours, causing sick patients to suffer needlessly for hours on rugged mountain roads.

During the rainy season, the danger of these alternative mountain routes increases dramatically because the unpaved dirt roads easily flood and fill with debris.

The road closures severely inhibit the efficient movement of food, medicines, and other essential goods in and out of the governorate.

The Houthi authorities should immediately ensure sustainable and safe access for all Yemeni civilians through the main arteries leading to and from Taizz city, the groups said.

Diego Zorrilla, UN deputy humanitarian coordinator for Yemen, recently told AFP that “the situation in Taiz is particularly serious.” International agencies and humanitarian organizations have also had difficulty taking in food and medicine for the civilian population.

On July 26, hundreds of Yemenis took to the streets in Taizz to protest the Houthi authorities’ refusal to open the main roads.

On August 2, Grundberg, the UN special envoy, announced the second two-month renewal of the UN-mediated truce, promising to intensify his efforts to reach “an expanded truce agreement” that would provide for reaching an agreement on “the opening of roads in Taiz.”

Despite these efforts, progress on opening the roads remains elusive.

Human rights groups have documented Houthi forces restricting food and medical supplies for civilians in Taizz between December 2015 and January 2016. Houthi guards at checkpoints prevented civilians from bringing in essential items such as fruit, vegetables, cooking gas, vaccination doses, dialysis treatment packets, and oxygen cylinders, and unlawfully confiscated some of these items.


“The siege of Taizz has become nothing more than a card on the negotiating table. Civilians are paying a high cost to exercise their right of movement and access basic needs such as food, water and basic materials,” said Radhya Al-Mutwakel Chairperson of Mwatana for Human Rights. “The Ansar Allah armed group (Houthi) should immediately end undue restrictions on movement by opening major roads and allowing all Yemeni civilians to travel freely throughout their country.”

In Yemen, A Girls Dream of Becoming a Model Ends in Solitary Confinement
Excerpts from Reports