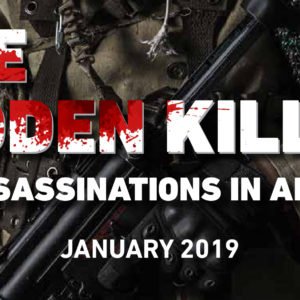 SAM Organization for Rights and Liberties said it has documented 103 assassination incidents in Aden city during 2015 – 2018, that commenced 43 days after Aden liberation from Houthis militia, and the UAE forces control over the city. The assassination victims included security personnel, imams, and politicians. SAM released its report “The Hidden Killer”, on the assassination incidents, which remained ambiguous for a while, till recently where some facts are revealing and might lead to the truth of these incidents.

SAM said, the report is based on statistics, gathered through monitoring and documenting of the assassination incidents during the reporting period, where 103 assassinations were documented in Aden governorate. SAM collected data from the media, victims’ relatives, concerned authorities, rights and security entities, to demystify these crimes that urged several political and religious leaders to flee the city for a safer place.

The analytical report, first of its kind, sheds the light on the assassination waves that hit the interim capital Aden, has claimed the lives of security, military and civil figures, following restoration of the city from Houthis militia, with UAE support, on 17 July 2015. The city which was supposed to stabilize following the aggressive Houthis war, has witnessed assassination incidents, believed to be systematic,  that targeted, specific category of military, security and civilian figures, raising many questions on the responsible parties, noting the indifference shown by the security apparatuses, and the controlling forces in Aden city, that failed to issue a statement to clarify these incidents, that targeted even Aden governor, brigadier Jafar Mohammed Saad, on 6 December 2015, and the motives behind them.

SAM report indicated that most assassination victims are security personnel, whose number has reached 42 officers, distributed among the Criminal Investigation, Political Security and Aden airport security, followed by imams and scholars 23 people, 12 of whom are from the Salafi sect, 4 from Islah party, and one from the Islamist movement Al-Nahda.

Military personnel come fourth in the list of victims, with 8 personnel, followed by resistance elements with 7 members, and other 14 of miscellaneous affiliations, including activists, sportsmen, teachers, judges, and prosecution members.

SAM report noted that the assassination wave commenced immediately following the end of Houthis war, where 18 assassinations took place in January 2016, one month after the appointment of Aidroos Al-Zabedi, as Aden governor, and brigadier Shalal Shae’, den security commander. According to observers, who preferred to remain anonymous, attributed the high number of assassinations in this month to the worsened political situation between the UAE and president Abdorabo Mansour, who was in Aden then, before his departure on 13 February, also the assassinations targeted anti-terrorism personnel among security and judiciary.

Year 2016, was the most bloodiest year, where 45 assassination cases were reported, at 48% of the total number of victims, majority of whom are security and military personnel, followed  by year 2018, with 24 assassinations, which is the year that witnessed tension between Hadi’s presidential guard brigades and UAE-backed Security Belt forces, that escalated to armed confrontations in January 2018, resulted on the SB control over the city. Majority of victims during this year were military personnel and imams, at 26%, while the year 2015 reported 13 assassinations at 14%, and finally year 2017, with 11 assassination cases, at 12%. SAM report noted that the assassination occurred in a short period of time, following a similar method, and that no security precautions were ever carried, indicating that the perpetrators are moving confidently, equipped with full information about the target. The report also, documented that these incidents targeted border security at Aden airport and seaport, with 8 cases.

SAM report concluded that direct shooting was the most common assassination means in Aden, where the first incident took place on 30th August 2015, whereas the first assassination using an explosive device, was on 30th July of the following year.

Apparently, fire shooting was preferred to ensure the success of the operation, where the IEDs succeeded in killing 5 only, and 14 other attempts failed, while 79 shootings succeeded against 15 only failed. Also, the IEDs although more secure for the perpetrators, they require high techniques, yet close fire shots might expose the perpetrators. SAM concluded that using such means of assassination indicate that the perpetrators are in control of the situation and can help to smuggle the assassination tools through the checkpoints and secure the safe withdrawal of the assassins. Also, can set them free if exposed, arrested and interrogated.

SAM confirmed that the security apparatuses, and the militia and their funding countries are the major suspects, unless and until the perpetrators are brought to justice and justice is ensured.

SAM called the Group of Eminent Experts formed by the UNHCHR to investigate these crimes in Yemen, including assassination crimes to their mandate, and consider such crimes as a high priority, and to undertake required political and security analysis to these incidents.

SAM also urged the legitimate government to initiate a serious investigation in all assassination incidents, expose the involved parties, and to unify all security apparatuses, terminate the security formations that operates apart from the official frameworks.

SAM also urged the legitimate government and the Arab Coalition to commit to penalize the involved parties and refrain from providing coverup, or protection regardless of any security and political consideration. Also, to provide protection for the victims’ relatives and to compensate them for the loss of their dependents.