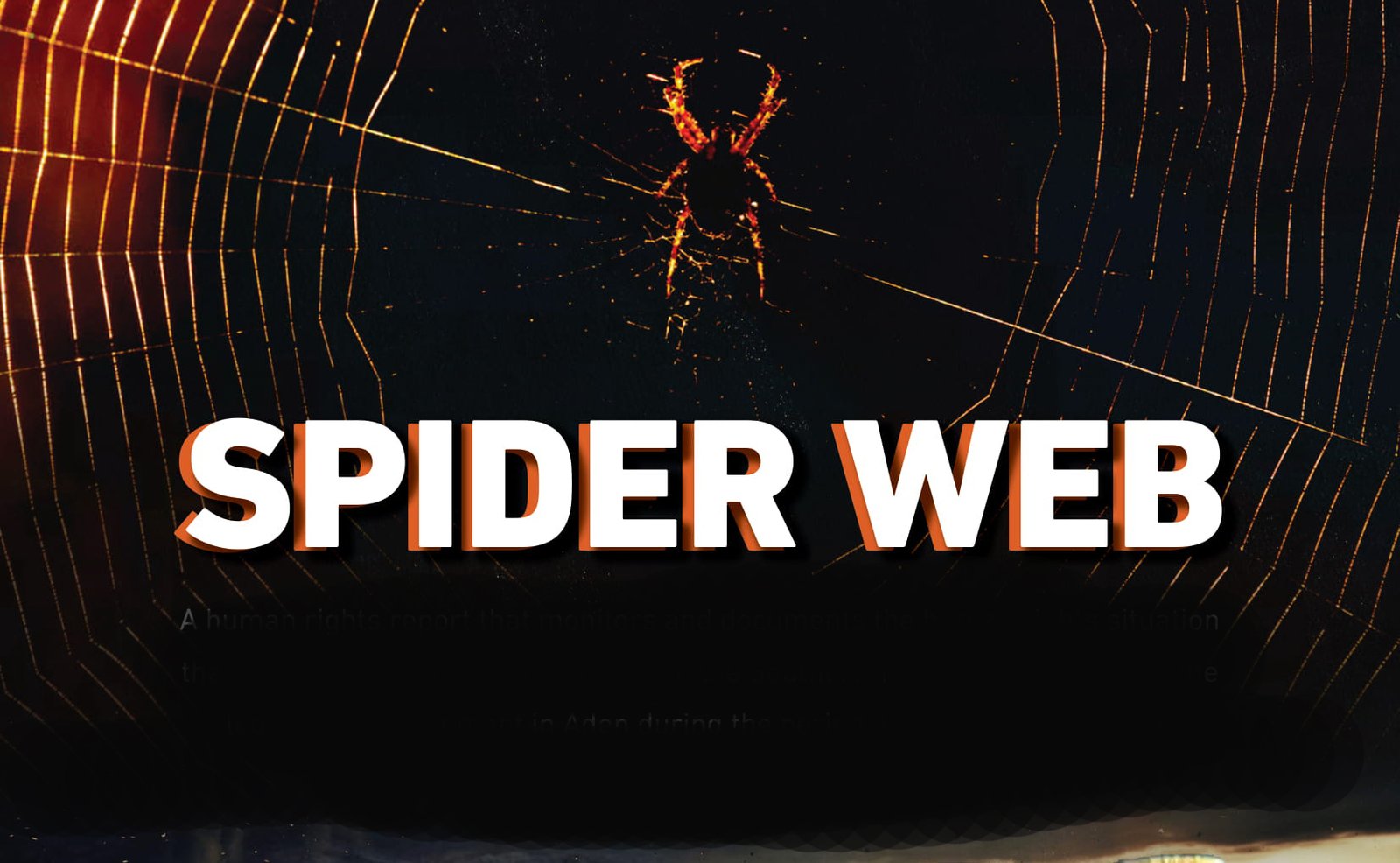 Geneva-based SAM Human Rights Organization released a report entitled Spider Web, in which it highlighted the human rights situation during the months of August, September and October 2019, covering (Aden, Abyan, Shabwa, Lahj), governorates that that witnessed violent fighting in Yemen during 2019, between the forces of the Southern Transitional Council working on behalf of the Emirates on the one hand, and the forces of the Yemeni government on the other.

The report reviews statistics on the violations SAM was able to access, and facts and testimonies of crimes committed during the reporting period.  The report lists the background of this conflict, and the attitudes and related events, starting with the formation of the "Security Belts" and ending with the signing by its parties of the Riyadh document, which is hoped to end this conflict.

“The example of those who take allies other than Allah is like that of the spider who takes a home. And indeed, the weakest of homes is the home of the spider, if they only knew.

(and that the houses are weakened if the spiders are home if they knew” - spider (41),

which is a sign of the weakness of the structure of the house on the one hand, and the state of conflict and warfare between some of the components of the Coalition that resembles the state of such   species that eat each other as soon as the interest is over.

SAM said it is keen to monitor and document all forms of human rights violations in Yemen, reminding of its role in exposing the secret prisons managed by the UAE in which the worst crimes and violations against innocent abductees are committed.

SAM documents various forms of violations in Yemen, north and south.  During the reporting period, the residents of the mentioned governorates suffered and are still suffering a lot due to the control of the militia loyal to the Emirates, which committed many human rights violations during its emergence and before the completion of its control of the security scene in some southern governorates.

SAM interviewed more than (53) victims and witnesses, and said that it had contacted a number of activists, journalists and rights activists in those concerned governorates.  It also obtained dozens of videos, photographs and documents from its original sources on the conflict in the governorates of Aden, Abyan, Shabwa and Lahj, facts of violations, and pictures of victims, which it examined.

According to information gathered by SAM through field team and interviewing victims, the dome of their families, and information received from activists working in the field, the statistics collected on the crimes during the months of August, September and October 2019, confirm the transfer of more than (2000) civilians in a coercive manner from Aden, including women and children, was carried out by the forces of the UAE-backed Southern Transitional Council. More than 700 civilians were subjected to physical and verbal violence.  Those forces closed (13) restaurants in the city of Aden, and (90) a multi-purpose commercial store.  While it was burned and destroyed (70) street vendors sales point.

The number of those who were assassinated and executed reached (9) dead, which is the statistic that SAM was able to verify, including (7) suspect to be killed by the Southern Transitional Council forces and one unclaimed. SAM also monitored the assassination of (11) l soldiers and civilians (2) of them, by the Islamic State, while the remaining 9 by unknown party.

SAM documented the death of 11 civilians and wounding of 37 others by the random attacks carried out by the Southern Transitional Council forces and government forces. SAM could not a tribute responsibility of each party due to the overlapping of the combat areas and that victims have not accused any party specifically. SAM documented the killing of 18 civilians by light weapons in Aden, Abyan and Shabwa, 7 by the forces of the Southern Transitional Council, 2 by Daesh, 3 during the confrontation between the government forces and the STC forces, and 5 during fighting between local gunmen.

SAM documented figures released by the Yemeni Defense Ministry of the dead and wounded resulted from the bombing of UAE fighters to a government military troops in Abyan, killing and injuring 300 soldiers, including 46 killed.

SAM also documented 29 violations against journalists, activists, human rights defenders and media institutions, distributed between arrest, death threat, prosecution, harassment, breaking, and prevention from work committed by the Transitional Council forces, in addition to one detention by government forces against TV correspondent in Shabwa governorate. While SAM documented (6) violations against press institutions, included between, storming, shooting, shutting and confiscation, committed by the Transitional Council forces, and by unknown party.

With regard to the arrest, "SAM documented (58) victims who were arrested and (4) forcibly disappeared in Aden, (55) arrest was recorded by the forces of the Transitional Council, and (7) were detained by unknown armed elements.  On plundering public institutions and private property, SAM monitored the looting of (14) public institutions, and the appropriation and plundering of (131) private property, including the homes of ministers and military and political opponents loyal to the Yemeni government.

SAM called on the investigative teams concerned with Yemeni affairs, including the National Committee to Investigate Allegations of Human Rights Violations, the Security Council Panel of Experts and the GEE of the Human Rights Council to seriously investigate human rights violations that were widely practiced during the months of August, September and October 2019 in Aden, Abyan, Shabwa, and Lahj governorates, also to investigate crimes related to undermining state institutions and disrupting law enforcement.

SAM urged the parties to the conflict, who signed the Riyadh agreement, not to consider the agreement as an impunity document for perpetrators of human rights violations.

SAM said that the United Arab Emirates must stop all actions against international law, including the Charter of the United Nations, which threatens security and peace in Yemen and the region, and further complicate and tragic Yemeni conditions.As well as refrain from committing crimes targeting civilians, end all forms of support for the forces acting on its behalf and accused of crimes in the southern governorates, and the forces of the Southern Transitional Council should immediately stop committing crimes against their opponents and release all those detained in connection with the conflict in the Aden, and desist from the ongoing deportation of people from Northern governorates residing in Aden, stopping all forms of attacks and revenge affecting their property, and lifting all restrictions against them.

SAM called on all parties to stop all forms of targeting of journalists, activists and press institutions, and to restore the situation in media institutions to what they were before August 2019. It also called on both the Southern Transitional Council and the Yemeni government to prevent incitement speech by media institutions and activists loyal to them, and to publish a discourse calling for tolerance and preserving the social fabric from damage.

SAM recommended the Yemeni government to hold all those involved in the crimes that claimed the lives of civilians accountable, and to investigate all allegations of violations committed by all parties in the governorates of Aden, Abyan, Shabwa and Lahj.  And work to spread a tolerant discourse that rejects hate and calls for harmony.