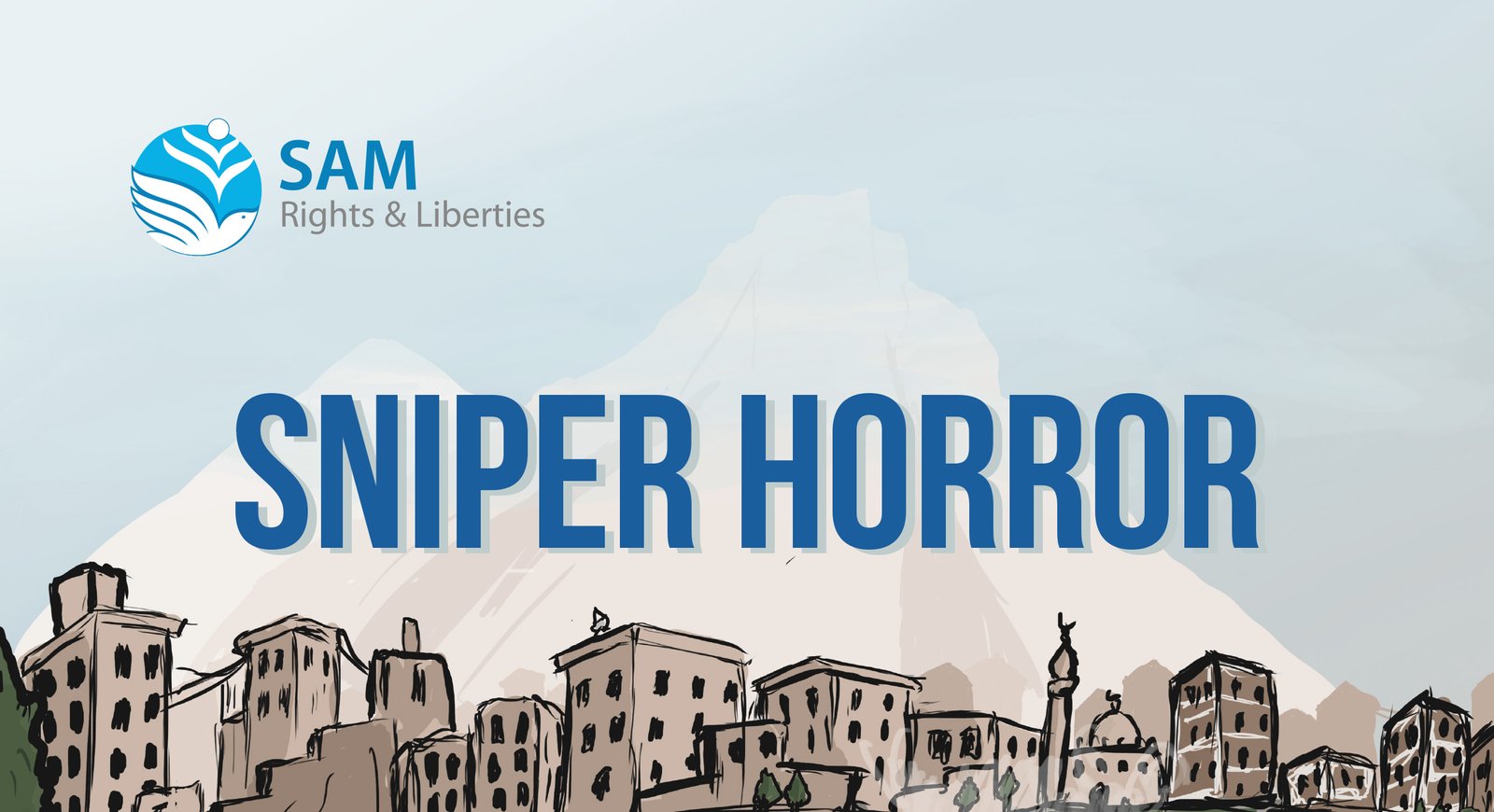 SAM Organization for Rights and Liberties launched a human rights report documenting the incidents of sniping crimes in Yemen for the period from March 2015 to December 2020.

SAM stated that the report (The Sniper Horror) is the result of five years of research and investigation and was prepared by a team of researchers and collaborators trained in writing the human rights story and using the internationally established monitoring and documentation mechanisms.

In addition to visiting the field, photographing victims, listening to them and to the eyewitnesses, interviewing medical sources, visiting hospitals, and using available means of communication, SAM obtained many televised clips of the victims’ stories, and relied on what it reassured after examination, analysis and matching of evidence in accordance with the methodologies applied by human rights organizations and investigation committees.

The organization said that the report "The Sniper Horror", which took the city of Taiz as a model - because its residents were the most affected by this crime - is a historical document because it contains many testimonies and stories of civilian victims, who did not receive justice or fairness during the last period. Also, judicial authorities did not investigate all of the attacks mentioned in the report.

Furthermore, the report archives the stories of the victims that contain a lot of ugliness, cruelty and pain and preserves them in historical memory and opens the door wide for those interested in the Yemeni human rights issue to pay attention to a file that has been kept unspoken of for a long time throughout the past period as the report establishes the merits of this crime and clearly shows how the parties to the conflict justify their use of snipers against civilians.

The organization said that the Houthi group and former President Ali Abdullah Saleh were ranked first among the parties to the conflict in the extent of sniping crimes as (714) civilians were killed, (480) by those forces combined during their alliance, and (234) by attacks by Houthi forces on its own after dismantling its alliance with Saleh’s forces since the beginning of 2018 until the end of the period specified for the report.

While SAM documented the killing of (5) civilians by attacks by government forces, and (3) others who were killed by attacks by pro-Emirati forces in Taiz and the city of Aden, specifically by attacks launched by the Abu al-Abbas Brigades and the Security Belt Forces. On the other hand, the killing of (3) was recorded at the hands of armed groups.

SAM said that this crime left wounds and disabilities on the victims as SAM documented the injury of 512 civilians, including 157 children and 85 women.

The Houthi and Saleh group was the most prominent actor during the period of their alliance, and the Houthi group alone after dismantling its alliance with Saleh’s forces at the beginning of 2018 as the number of casualties from the attacks of this alliance reached (489). SAM documented the injury of 4 civilians in attacks carried out by the Abu Al-Abbas Brigades and the UAE-backed Security Belt Forces while SAM documented the injury of 19 civilians in sniper attacks whose perpetrators were not known.

To reinforce the principle of no impunity, the report listed the names of a group of people involved in sniping crimes in Yemen, including military leaders of the Houthi group, the National Army, the National Resistance on the West Coast led by Tariq Saleh, the UAE-backed Abu Al-Abbas militia in Taiz and the UAE-backed Southern Transitional Council. The report also devotes a chapter to harrowing stories and testimonies of former victims of arbitrary detention, enforced disappearance and torture.

The report concluded that the crime of sniping civilians in Yemen was committed by professional fighters using sniper weapons on a large scale against civilians, and the parties to the conflict used it against each other to varying degrees. The report reveals that the Houthi group and Saleh's forces during the period of their alliance, and the Houthi group alone, after dismantling its alliance with Saleh's forces, were the parties that used this weapon the most, and because of them hundreds of victims fell. On the other hand, the government forces and the UAE-backed forces used it to a limited extent.

The report called on the Security Council to take serious and effective steps to maintain peace and security in Yemen, forcing all local and regional parties associated with it to stop attacks against civilians, and to stop all forms of support provided to armed groups, in addition to referring the Yemen file to the International Criminal Court to investigate all forms of crimes committed by the parties to the conflict, which fall within its jurisdiction to search, investigate, and hold those responsible to account.